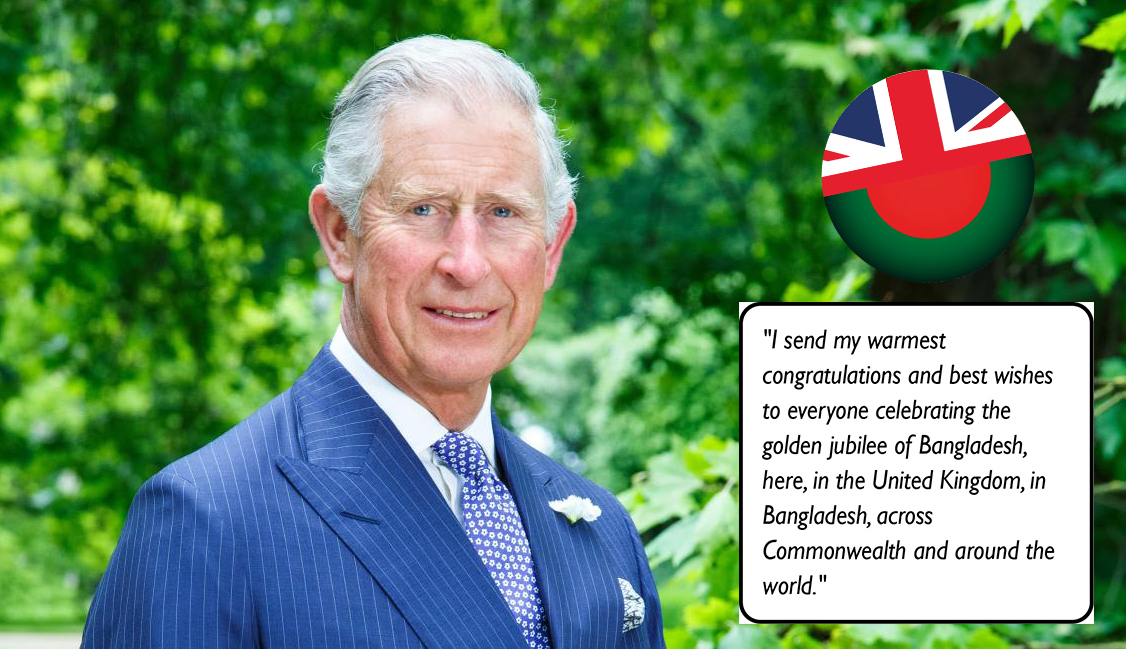 Prince Charles has sent a message of congratulations to Bangladesh on its 50th anniversary – as has UK Prime Minister Boris Johnson.

Expressing his regret that the pandemic had prevented him from visiting the country personally, Prince Charles commended Bangladesh’s remarkable achievements, including: bringing more than 50 million people out of extreme poverty since 1990; increasing life expectancy and reducing infant mortality; and turning the economy into one of the fastest-growing in the world.

Reflecting on the past fifty years, the Prince also praised Bangladesh’s “considerable leadership on tackling the existential threats from accelerating climate change” and welcomed “the role of The Honourable Prime Minister, Sheikh Hasina, in chairing the Climate Vulnerable Forum of nations most affected by the multiple threats of global warming, climate change and biodiversity loss”.

The Prince, who is Royal Founding Patron of the British Asian Trust, noted the Trust’s support for Bangladesh, and highlighted the Trust’s work in the past year which has included setting up COVID-19 sample collection kiosks, building on mental health awareness by providing counselling services, and supporting children missing out on school through a virtual education initiative.

Contemplating the pandemic, The Prince acknowledged the “dreadfully heavy impact on so many lives and livelihoods” and expressed “heartfelt gratitude to frontline workers helping to keep Bangladesh safe during these difficult times, and to the many British Bangladeshis who contribute so much to the National Health Service in the UK”.

The Prince went on to recognise the 600,000 strong British-Bangladeshi diaspora community and the “incredible contribution this community has made to all walks of British life”.

He added: “We come together today in the context of the Commonwealth, as friends and beneficiaries of a common heritage. We shall remain together as partners over the years to come.

“I send my fondest wishes to Bangladesh and all those celebrating this very special occasion. Shadhinotar ponchash bochhore Bangladesh ke amar obhinandan!”

In his video message, Boris Johnson said it was ‘amazing how much progress the country has made since its birth’ recalling how warmly he was received when visiting Bangladesh in 2018.

He added: “Looking forward to the next 50 years of friendship. I wish everyone the very best for your Golden Jubilee.”

A view from Chef Santosh Shah