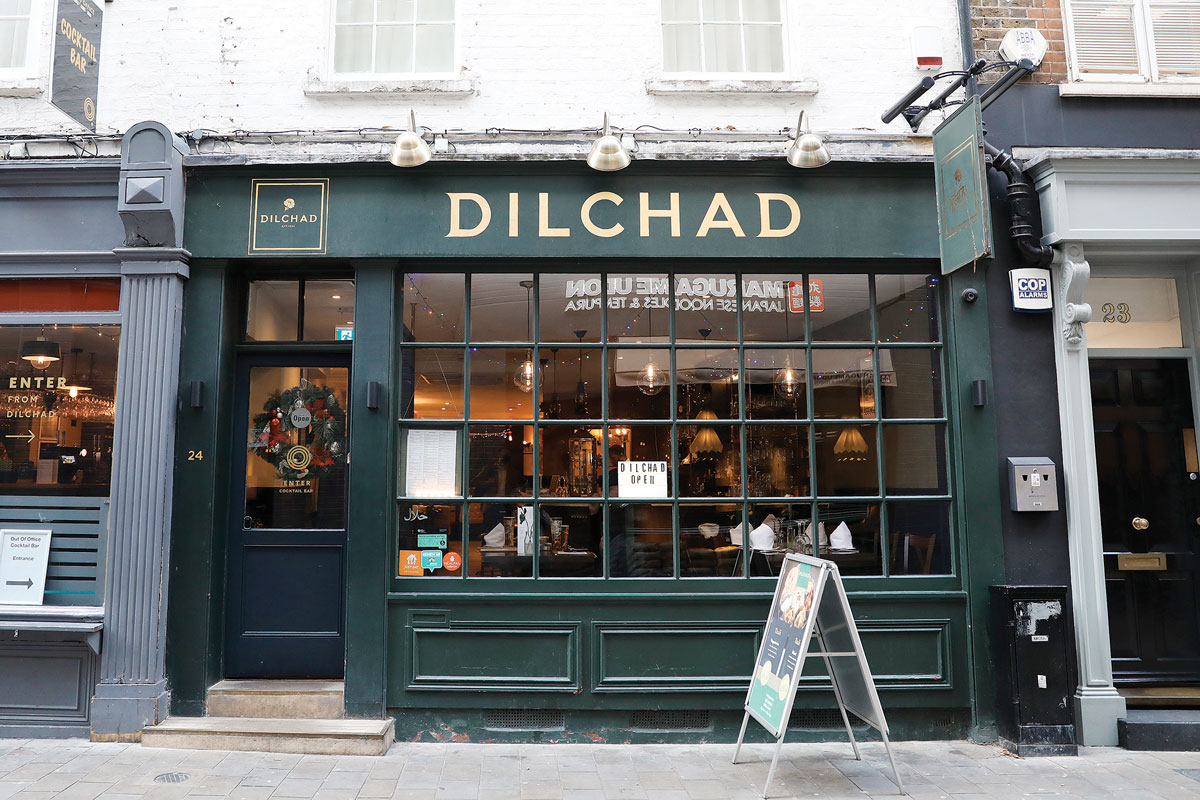 From political activism in the 1960s to crypto currency in the 2020s, Dilchad has provided an inspiring place to both meet and eat.

It was in the 1960s when London made its mark as a leading global financial centre. It was around this time – in 1962 to be precise, that Dilchad first opened its doors, just a stone’s throw away from Liverpool Street Station. Founded by the Choudhury family, the business is still very much a family affair, but its food and its diners have changed considerably over the last six decades.

From its inception, the restaurant was popular with workers in the financial district but it also thrived as a hub for political gatherings. The UK branch of the Awami League, the political party which led the movement for Bangladesh’s independence, established its headquarters at the restaurant in 1970. Abdul Matlib Choudhury, the founder of Dilchad Restaurant, was not only a supporter of the Awami League, but also a leader of the first generation Bangladeshi community in the UK.

“My father started Dilchad Restaurant in 1962 and also had ties to the Bangladesh Caterers Association in the UK, as well as being a community leader,” Shafiqursays.“This restaurant was not only a place for business lunches, it was for the community too, with many political meetings held here, particularly during the 1969 uprising in East Pakistan”.

Dilchad also served as a meeting place during the movement for independence in Bangladesh, no doubt with many heated conversations taking place and important decisions made, in a venue nearly 5,000 miles away from where the action took place. The father of the nation and founder of Bangladesh, Bangabandhu Sheikh Mujibur Rahman, visited Dilchad while his daughter, Sheikh Hasina, the current prime minister of Bangladesh, has also been to the restaurant many times when she was the leader of the opposition.

“It has changed a lot since we first opened,” reflects Hamidur, the youngest son of Abdul, who currently runs Dilchad alongside Moshiur Rahman Choudhury, the third generation of the Choudhury family. “There used to be very little competition but nowadays you can see so many more Indian restaurants in the area. “Most of the customers were business people during the day and the local community in the evening. It was a place to come for friendship and good food. But gradually over the years, the business clientele has changed – many offices relocated to Canary Wharf in the 1990s, then we had the recessions in the early 2000s and 2010 and the pandemic in the last year, with many people now working from home.”

The restaurant has also become smaller – it used to seat around 170 in total but now offers 90 covers. Moshiur started working there back in 1994, although between then and now, he spent around 10 years away from the restaurant industry working in the commercial property sector.  Moshiur acknowledges that it’s rare for someone of his generation to want to join the family restaurant business but having visited Dilchad regularly when he was a child, he is keen to keep the tradition and the memories going. For him, the biggest change over the last quarter of a century has been with diners.

“We used to get mainly men at that time, those working in nearby offices –  now we have a mix of men and women and a crowd that is younger,” he says, referencing the opening of the nearby Chapter, a building providing accommodation for students, as one driver for this. “The demographic is a lot more diverse – with people from Asia, India, Pakistan and Bangladesh, it’s a different vibe. We still get many businesses dining with us but it’s moved away from the traditional finance and insurance backgrounds you would expect – our diners work at start-ups, IT and crypto currency businesses.”

In keeping with the tradition of being a meeting place for seismic events and topical subjects, The Crypto Curry Club, a series of networking lunches for blockchain and cryptocurrency experts, held several events at the restaurant this year. Founded by Erica Stanford, the aim of the Club is to share insights and ideas about the crypto currency space, while enjoying Indian cuisine. Fintech Starling Bank has also held events at Dilchad.

This new demographic also has different tastes, preferring lighter, smaller dishes. Dilchad has looked to reduce its menu in recent years, but some of its loyal, older customers prefer the traditional curries. Keeping everyone happy is a delicate balancing act, as Moshiur explains.

“A demand for less ‘heavy’ lunches meant we introduced some lighter dishes such as Chicken Tikka Caesar Salad and Kuchumber Salad. People are still asking for chicken Madras, Vindaloo and Korma so we’ve kept these on the menu. And with more competition in the surrounding area, we need to keep up with the latest trends. We are developing a street food menu in the new year, and more tapas-style sharing dishes.”

Dilchad also has a range of signature dishes, including Katmandu, a fiery curry of chicken or lamb, with Naga chilli blended with fresh green chillies and Scotch bonnets. It’s also expanded its vegan offering, although as Moshiur points out, many Indian dishes are vegan.

Staying on top of tech

To keep moving with the times, Dilchad has worked with several development chefs and sought advice from friends in Bangladesh on new or popular food trends. Ensuring that dishes are ‘instagrammable’ is also important. In previous years, Dilchad would advertise in publications such The Evening Standard but Moshiur says this is no longer cost effective.

“Now, it’s all about social media marketing, with Facebook and Instagram and we are getting another company to look at how we can best use TikTok – it’s a great platform for showcasing food,” he says.”

Over the years, the lunchtime trade has greatly reduced, reflected in the fact that many of the shops along the nearby Wentworth Street have long since shut their doors. And during the pandemic, the restaurant was closed as there was little demand for takeaways in the surrounding area, particularly with the majority of offices shut. Dilchad used the time wisely, developing different menus and since reopening in May this year, it has tried to ramp up its takeaway offer and says it is doing a lot more of these than it used to.

Its main focus though is on the dine-in trade. To continue to attract a new generation of diners, it’s important to invest in technology.

“I am looking at developing an online ordering facility and online booking system, customers order from these but the established ones now take a massive cut,” says Moshiur. “It’s important to keep up to speed with channels such as Instagram too – the food has to look stunning and it can be challenging to make a curry look attractive. We’ve got a popular thali dish that lends itself well to this.”

In 2022, Dilchad is marking its 60th anniversary, and plans to celebrate in style with a week-long series of events. The restaurant hopes to stage a charity event, offering menus priced as they would have been in the 1960s, featuring dishes from that era too.

For the present time however, Dilchad’s challenges are in keeping with many other restaurants.

“Christmas time should be one of our busiest periods, but in light of the new Covid-19 variant, we’ve had lots of cancellations for bigger groups,” says Moshiur. “We’ve also seen people dining out more in the earlier part of the week – Wednesdays and Thursdays are very busy but Fridays less so. The going is very tough but I am hopeful we will see a turning point.”