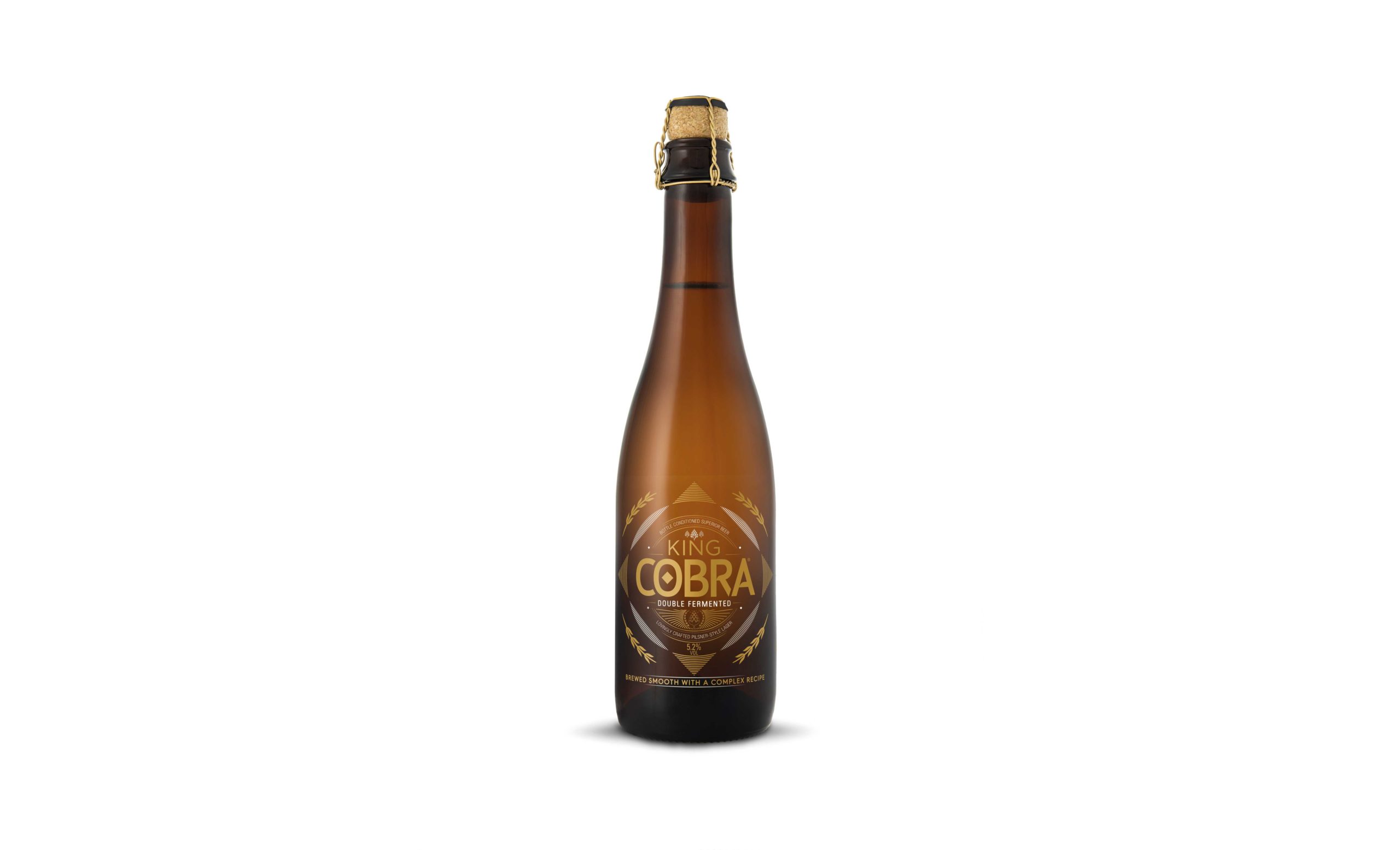 Following the success of multi-award-winning King Cobra, the world’s first Pilsner style lager double fermented with an ale yeast, Cobra Beer is delighted to announce the on-trade launch of Mini King Cobra – the same unique expression of liquid, packaged in a smaller 375ml offering. The Mini King Cobra Launch precedes the imminent relaunch of the newly-branded 750ml King Cobra, following a £1.2million investment into the re-alignment of the brand as a world-leading beer brewed smooth to be the ideal accompaniment to a host of different cuisines.

Mini King Cobra’s first venture into the on-trade is a partnership with Kama by Vineet, located within the newly renovated Harrods Dining Hall. The restaurant, headed up by Vineet Bhatia, the first Indian chef-proprietor to receive a Michelin star, is the first Indian restaurant to feature in Harrods’ 170-year history. Mini King Cobra has been chosen by Vineet as the perfect premium pairing to the Lobster Chettinad Biryani.

Brewed in Belgium’s historic Rodenbach Brewery, Mini King Cobra is created using the finest barley, malt, hops from Bavaria’s Hallatau region, and crucially, rice, before undergoing the primary fermentation process. The liquid is subsequently refermented in the bottle – precisely the same method to that of champagne – to produce a premium, warming and powerful depth of malt flavour coupled with an extra smooth yet frothy mouthfeel.

A versatile liquid that can easily pair with spicy food, fish and meat alike, Mini King Cobra is Brewed Smooth For All Food – the soft mouthfeel soothes whilst the sweet malt flavour enhances a wide array of flavours.

Vineet Bhatia comments: ‘The partnership between KAMA and Mini King Cobra could not be more perfect. The bottle itself is not only a work of art that looks right at home in Harrods’ Dining Hall, but the smooth, fruity taste with these unique, hidden depths serves only to enrich the flavours on our menu at KAMA.

Of course, the beer compliments many of the dishes, but we do encourage our guests to try the Mini King Cobra with the Lobster Chettinad Biryani. Together, the tropical, fruity taste of the Cobra lands upon the rich, warming flavours of the lobster, creating something quite magical. Our name, ‘Kama’, comes from the Sanskrit word for ‘desire’, and this is certainly a combination to desire.’

Lord Bilimoria, Founder of Cobra Beer comments: ‘I am thrilled to be launching our award-winning King Cobra in a smaller format. It is also an honour to be launching into the on-trade with a partner such as Vineet Bhatia – he represents truly refined and premium cuisine, and we are so glad that he views Mini King Cobra as the equivalent drink to pair with his exquisite Lobster Chettinad Biryani. All Cobra Beer is Brewed Smooth For All Food, and we are excited to launch this premium offering for consumers to enjoy with whichever cuisine they may choose.’

The club is one of the Premier League’s longest serving and like Kingfisher, has a rich history of producing the finest.

The agreement represents Kingfisher’s first ever partnership in the Premier League, as it looks to grow its presence around the world. As Official Beer Partner, Kingfisher will now provide the match day beer at St Mary’s Stadium for supporters, while it will also be launching a special Southampton FC signature ale, which will be available on draught at all home games. Also served at the ground and in hospitality will be a trio of other iconic World beers from Kingfisher’s UK product portfolio.

Kingfisher will also be working with the club to enhance the match day experience at St Mary’s for supporters, including bringing a unique Kingfisher flavour to the Fan Zone outside the stadium.

Through a number of exciting initiatives, Southampton and Kingfisher will, in addition, be taking the Premier League to India through a range of innovative content and a selection of unique experiences.

Southampton Football Club’s Commercial Director, David Thomas, said: “We are delighted to be welcoming Kingfisher into our valued family of commercial partners, and are looking forward to providing our supporters at St Mary’s with the offering of their range of high-quality, leading beers.

“Like ourselves, Kingfisher possesses a long, established history, while also priding itself on innovation and its ability to think differently, and these shared values mean we have a partnership that is built on incredibly strong foundations.

“Kingfisher is a world-renowned brand, and we are excited about being able to help them further grow their reputation both here and around the world, as well as working with them to provide a new gateway for the Southampton name in India.”

Shekhar Ramamurthy the Managing Director of Kingfisher’s parent company United Breweries comments “This is a hugely exciting partnership for the Kingfisher brand and we look forward to engaging with Southampton fans across the globe. India’s growing interest in the English Premier League is unquestionable and we are thrilled to be partnering with this dynamic club in the world’s best football league”.

An evening of sharing ideas with industry experts

The main purpose of this event is to raise standards and learn new techniques,” says Curry Life Editor Syed Belal Ahmed. It’s the only way forward.”

Now in its eighth year, a stellar line-up of distinguished speakers journey to the Radisson Blu Edwardian hotel in East London on August 19th, along with 150 restaurateurs and chefs from establishments up and down the country.

After nibbling on a selection of tasty canapés and mingling with other attendees, we enter the main space – taking our seats, we settle in for the proceedings. First up, from global public health organisation NSF, and representing headline sponsor Just Eat, is Ashvini Pancholi-Dhillon.

“84% of people who eat out or order online are aware of food safety,”. They don’t want to dine at a place that has a zero, one or two rating”she says. To combat that, NSF provides a number of services – some free – such as improving hygiene and compliance.

Leading on from that perspective, Ben Palmer from drinks partner Kingfisher Europe addresses the audience. “We’re facing huge challenges,” he says. “We all recognize that there are turbulent times ahead because of workforce shortages and Brexit. A recent CGA report cited that Asian dining alone has gone down by 3% this year. That should sound alarm bells.”

Showing resilience is the best way to deal with such issues. “We’ve got to lead the way in innovation, stay ahead of the curve, and become more diverse and regional,” says Ben. “That will attract the new millennials of this world, who aren’t interested in – dare I say it – chicken tikka masala. They go to Pakistan and India and want to try what they ate there, back here.”

What else can be done to help the situation? Experimenting with new ingredients, such as jackfruit should be high on the agenda. With that, Noreen Finnamore from Buckley & Beale World Food is handed the mantle and extols the virtues of the natural, versatile option. Good for the planet, easy to grow, and nutritionally dense, it also offers a meat-like texture and has a remarkable ability to soak up flavours.

“A staggering 92% of plant-based meals consumed in the UK last year were eaten by non-vegans,” says Noreen. “This is not a fad; it has wide appeal.” In line with that, Buckley & Beale has been working with The Jackfruit Company to launch an ethical and sustainable product that’s imported from India and prepared especially for food service. Giving guests the opportunity to sample some, Chef Abul Monsur whips up a biryani, where spices and shreds of the savoury-tasting fruit mingle with rice.

Rupert Rowley takes to the stage next and says a few words. Having been at the helm of Michelin-starred Fischer’s Baslow Hill for seventeen years, he now holds the position of Development Chef at MSK Ingredients. “The easiest thing is to take something fantastic and do very little to it,” says Rupert. “That’s what it’s all about – the quality determines the end result.”

More and more, people want to know the provenance and history of what they’re eating. And they’re keen to hear what makes a dish stand out from other versions. “If you can answer those questions, you’re justifying what you’re doing and can charge more money,” says Rupert.

As he takes his seat, ‘Curry Queen’ and author of twenty-seven books Mridula Baljekar rises, and impresses with talk of fat-free Indian cooking. “You may think it’s impossible to do, but it’s not,” she says. A health scare prompted Mridula to re-think her diet and delve into a new way of creating recipes. “After a lot of trial and error I came up with a method by which you can make delicious food without a drop of oil, by using the natural fat that’s present.”

Mridula demonstrates by conjuring up her adaptation of chicken korma, using pre-roasted ground spices, low fat yoghurt and a single cream alternative. “That is absolutely delicious,” says a taster from the crowd, “I can’t tell the difference.”

With a handful of speakers left, we listen to esteemed veteran Mark Poynton advise on  why healthy eating choices should be offered, Health Officer Shamsul Islam command the subject of allergy awareness, and Restaurant Manager Mo Gherras highlight the significance of polished and authoritative service.

And then it’s time to tuck into a Bengali feast prepared by established enterprise Mint Caterers. Starters of silken chicken reshmi kebab and textural aloo papri chaat are wolfed down, with empty platters soon replaced by steaming bowls of melt-in-the-mouth lamb shatkora bhuna and king prawn jalfrezi – the plump crustaceans are generously coated in fiery sauce and peel away from their shell with ease. Desi veg is flecked with jackfruit seeds – nut-like, they add a subtle crunch.

As the night draws to a close, Syed’s words ring in our ears. “It’s important to talk to each other;” he says. “If we don’t change, our industry will die out.”

A view from Chef Santosh Shah