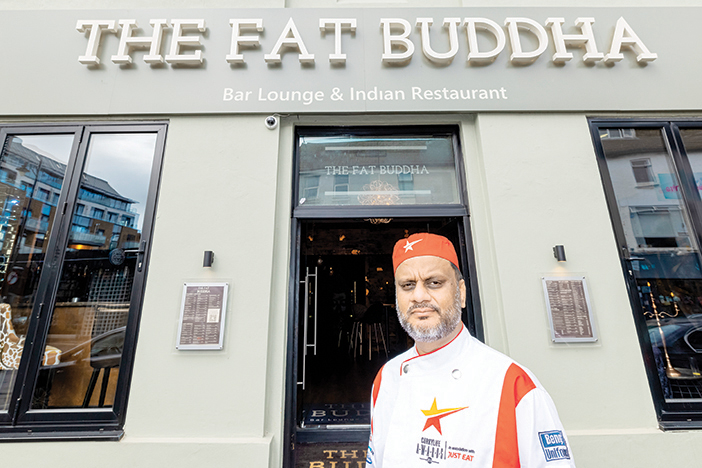 There’s not much that escapes the eye of Jafor Solim Uddin, head chef at The Fat Buddha restaurant in Maidenhead. Curry Life managed to squeeze some time with him just before a mid-week evening service, but he still headed to the kitchen several times during our chat to check on his staff and a number of takeaway orders. Restaurant owner Shorif Ali describes his chef as ‘always in control’ and says that nothing gets out of the kitchen without the chef seeing it first’. He even jokes that Uddin keeps an eye on the front of house operations too.

Uddin, who prefers to go by his nickname Suhel, was originally born in England and brought up in Bangladesh, before returning to the UK in 1985. He has been at The Fat Buddha in Maidenhead for around 18 months, ever since it opened in March 2020, just prior to the pandemic. Previously, Suhel was at the original outpost of the restaurant (also called The Fat Buddha), in Berkhamsted. This one opened in 2015 and he worked there for around a year.

Suhel’s relationship with Ali goes back much further however, with the two having known each other for around 25 years – Suhel originally worked as a chef at restaurants owned by Ali’s parents. His father was also a chef, but Suhel learnt his trade from working in many other restaurants – around 15 in all before The Fat Buddha, with his longest stint at one restaurant being around 13 years.

Suhel doesn’t describe being a chef as a job – instead he refers to it as a passion; in the same way as people care about the food that they eat, he cares about what goes into the dishes and how they are presented. A typical day will see him arrive at the restaurant around 11am, where he oversees three other chefs, preparing base sauces and main ingredients until mid- afternoon, before getting ready for the evening service.

Suhel’s style of cooking is, in his own words, ‘not your typical Indian dishes, with food given a twist with unusual ingredients and different spicing to suit people’s palates’. Sauces are flavoured with coconut milk, pepper, coriander, garam masala and a range of spices and Suhel also makes a number of fresh chutneys.

Some of his signature and favourite dishes include King Prawn Moglai, grilled king prawns medium spiced with cashew nuts, Buddha Chicken (made with chicken fillet to ensure the meat is tender) and Tandoori Broccoli, served with yoghurt and mango sauce. Lamb Chennai, made with pepper and red chilli topped with coconut milk, is also a standout dish.

“I have tried most of the dishes we serve and if I don’t like it, it doesn’t get served,” he says. “I love cooking – it’s hard work and long hours but if you don’t enjoy it, you can’t be a good chef.”

The restaurant is located in an affluent area, with Ali saying that people are keen to not just dine but to have an experience too. The restaurant has a cocktail bar with its own mixologist, with many people arriving for drinks before moving through to the main restaurant.

“We refresh the menu every six months and I create new dishes,” explains Suhel. “If there are some dishes that are not selling well, or which are difficult to maintain, we remove them, one example being sea bass as it was too time-consuming to prepare. Quality and maintaining consistency across the board is key to success and even after 35 years, I am not tired of the industry. My biggest challenge is finding good chefs – I’ve brought my own team with me, people I have known previously and whom I can trust. There is a big need in the curry industry to boost skills.”

Suhel also oversees The Fat Buddha’s ‘Outdoor Tandoor’ offer, which provides outdoor catering for corporate events, parties and celebrations, with Suhel providing live cooking. This runs mainly during the warmer, summer months, with a choice of four menus, while indoor event catering is available too, choosing dishes from the menu. The restaurant is also looking to be more sustainable in its approach to food, with Ali sourcing many of the ingredients from local suppliers. Vegans and vegetarians are catered for too, with dishes including Sabsi Bahar (dry mixed vegetables) and Paneer Shashlik, marinated Indian cheese, served with peppers, onions and tomatoes.

Suhel also enjoys being creative in the kitchen – customers often have requests for certain dishes, giving Suhel the chance to be inventive and to experiment with spices.

The restaurant also has a thriving takeaway service and on a busy evening (most Fridays and Saturdays) Suhel is in charge of between 90-100 covers. The Fat Buddha tries to ensure a smooth service by inviting people to enjoy drinks in the bar area and ordering a few canapé-style starters, before progressing to the main dining area. It’s a place where people like to linger and enjoy their food.

Even after 35 years in the business, and having recently won the ‘Best Chef’ award at the Curry Life Awards, held in October, Suhel is hungry for another challenge. There is the potential to become executive chef across the two Fat Buddha restaurants, overseeing the kitchens at both. Suhel is also keen to extend his skills and knowledge, and is proud of his membership of Curry Life’s Chef’s club, a networking orgnaisation for curry chefs.

“The Club is a great opportunity for learning from your peers, it can help to give you ideas to change things, and if I have any issues I want to raise, I can speak to other members,” he says.

The one thing Suhel doesn’t do is cook at home – he leaves the kitchen and the food firmly in his wife’s hands. 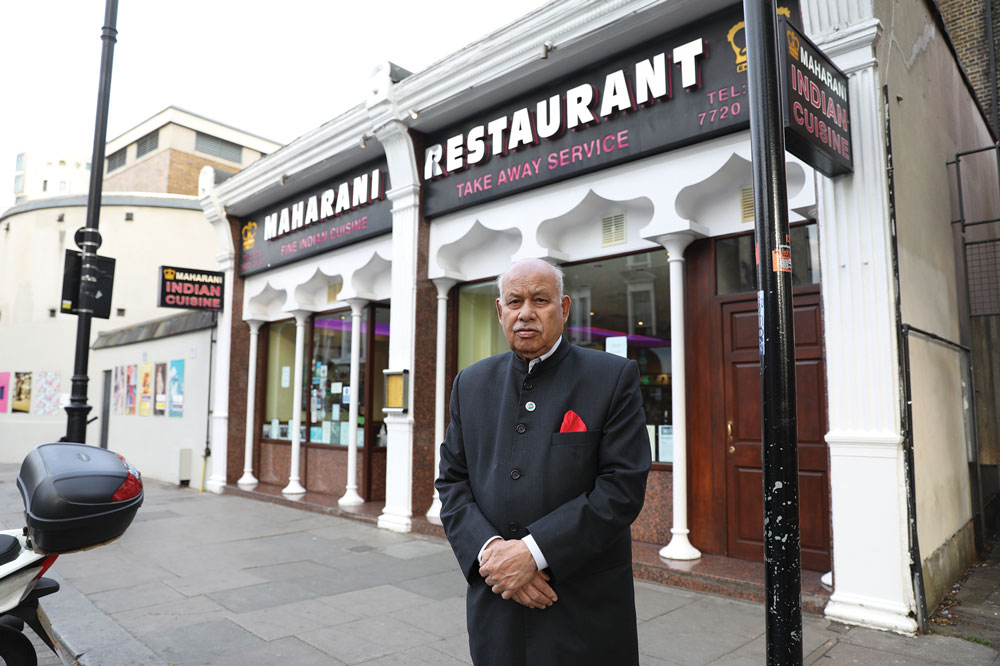