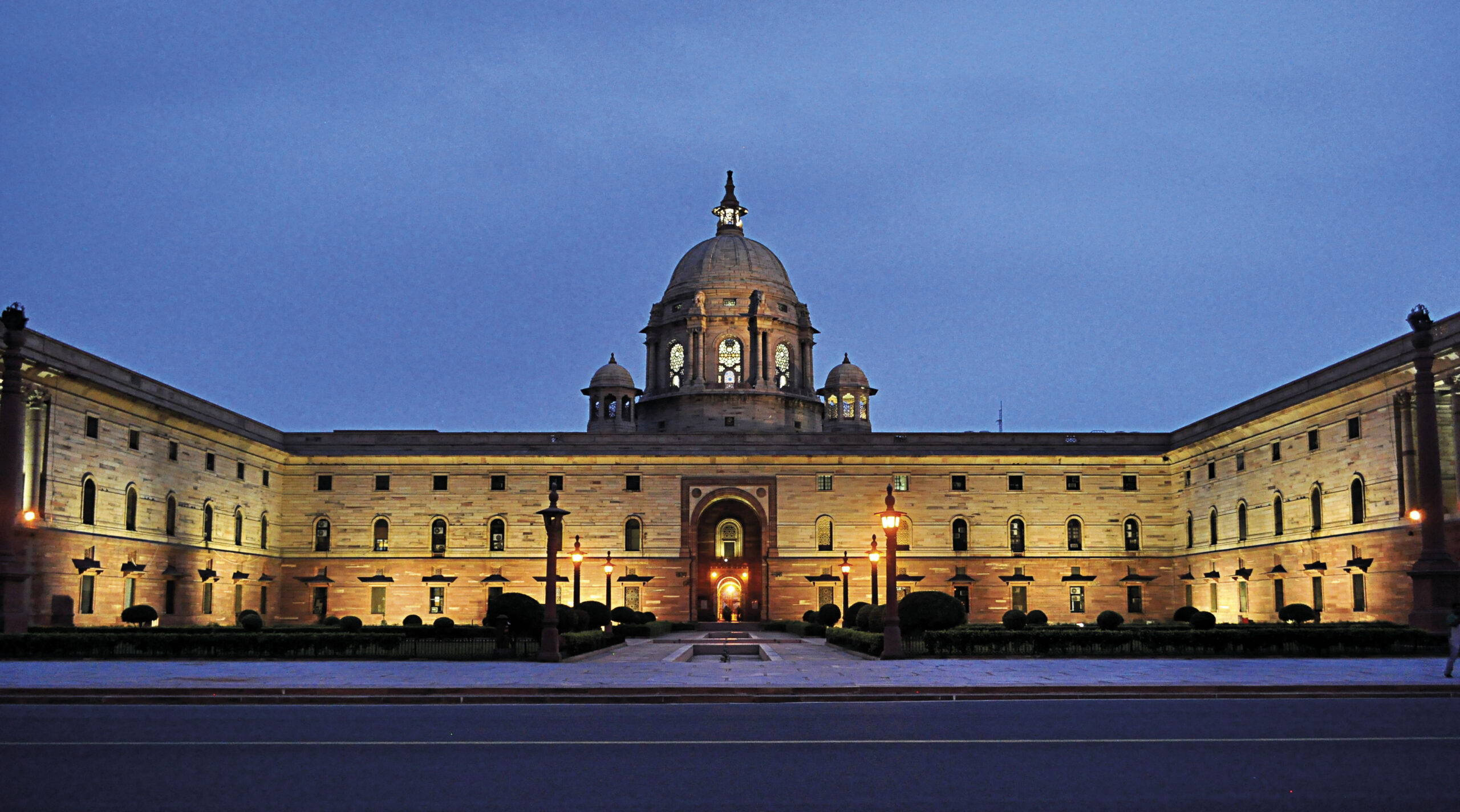 The British had a lasting impact on Indian architecture, as they saw themselves as the successors to the Mughals and used architecture as a symbol of power.  They brought in the world view, which made the indigenous architecture more vibrant and was later known as Indo-Saracenic architecture.

In a country with a history as old as India, the architectural heritage of the two centuries is hardly a summation of the past, especially when, the distant past is easier to recognise and appreciate that the recent past.

Indian subcontinent has been invaded ever since the times of Aryans. The invaders always attracted by richness of her natural resources, craftsmanship of her countrymen and glory of an already flourishing reign. The Europeans interest with India persisted since the classical times. The expedition of Vasco da Gamma to discover India in 1498 to the Dutch in 1590 and then the East India Company in 1600. Like all other aspects, colonization of Indian also had an impact on architecture style. With colonization, a new chapter in Indian architecture began.

Europeans brought with them their world view and a whole understanding of European architecture Neo-Classical, Romanesque, Gothic and Renaissance. The Portuguese architecture adapted the country’s climate appropriately, giving rise to Iberian galleried patio house, the Baroque churches of Goa, Se Cathedral and Arch of Conception.

The Danish influence is evident in Nagapatnam, which was laid out in squares and canals and also in Tranquebar, now Tharangambadi in Tamilnadu and Serampore in West Bengal. The French gave a distinct urban design to its settlement in Pondicherry by applying the Cartesian grid plans and classical architectural patterns.

However, it was the British who left a lasting impact on the India architecture. They saw themselves as the successors to the Mughals and used architecture as a symbol of power. When the British government had to consolidate its position in India, a whole new architecture was developed.

In the eclecticism of the age, English designers, disgusted with the classical and mediaeval styles of Europe’s past thought fit for his particular purpose, had turned back to the native vernacular traditions and produced the so-called ‘Free-Style’, hybrid but non-historicist.

However, it is particularly difficult to see colonial buildings as being a part of our past since even today; they are in active use in India. Indo-British architecture is characterised by structures which are monuments and many functional buildings which have monumental characteristics.  Writer’s building in Kolkata, the Delhi Town Hall, the New Delhi secretariat, the Victoria Terminus now rechristened as Chatrapati Shivaji Terminus in Mumbai and many more which are now termed as “Heritage Buildings’, continues to serve the nation and serves as a testament of the triumphant of Britain’s conquest of India.

Erstwhile Bombay, Calcutta and Madras, now Mumbai, Kolkata and Chennai, and of course Delhi happens to have the largest culture of colonial structure in India, since they were the capitals of the three British presidencies, and Delhi from 1912 the capital of the empire.

Delhi’s morphology has the stamp of two imperial decision – that of Mughal’s decision to shift their capital from Agra to Delhi and later that of the British from Calcutta. Imperial Durbar at New Delhi was inaugurated by the British in 1931. Like Calcutta, it was stamped with the hallmark of authority and like most other seats of British power in India it stood apart from its predecessors.

The prevailing enthusiasm of Anglo-Indian imperial designers for the synthesis of eastern and western styles quailed before the problem of assimilating an urban order, devised in accordance with the principles of the modern English Garden City, and the vital chaos of Shahjahanabad: the latter seemed to be the very embodiment of all the evils of laissez-faire growth that the formulators of the Garden City movement most specifically deplored.

Sir Edwin Lutyens, who is credited for designing New Delhi, had arrived in India to undertake this great work had scant respect for the subcontinent’s architectural legacy. His views grew only the more derogatory with first-hand familiarity – especially with the Anglo-Indian Imperial hybrids developed by his immediate predecessors, but also with the traditions of ‘veneered joinery’ from which those hybrids were drawn.

Lutyens’ imperial eclecticism ranged from Wren’s St Stephen’s Walbrook (for the Viceroy’s library) to the Mahastupa at Sanchi (for the central cupola) and the chahar bagh. However, at the end of his trip, he took in the ubiquitous Indian ‘chattriand chadya’, cross-fertilized acanthus and volute with padma and bell for his Order and tethered Indian elephants at salient portal corners where the great ancient Mesopotamian monarchies had ceremonial syncretism winged monsters.

New Delhi as envisioned by Lutyens, was laid out five-kilometres south of Old Delhi on a well-drained site standing slightly above the level of the surrounding plain. The resulting complex is a spacious, attractive, and carefully planned city, with broad, tree lined avenues and many open areas, parks, gardens, and fountains.

Many of New Delhi’s best-known landmarks lie on a line running east to west through the city. The line starts at the National Stadium. Then it passes through the Children’s Park and the War Memorial Arch along the impressive Raj Path, through Central Vista Park, to Rashtrapati Bhavan (the residence of the president of India). A similar line running north-south, known as “Janpath,” goes from the main shopping centre, Connaught Place, to residential suburbs. Several districts retain their own character. The Civil Lines, originally laid out to house British colonial officials, is now a residential area for well-off Indian government officials.

On the other hand, the hybrid aspect of the style devised by Sir Scott for Bombay – though still essentially foreign and historicist – was a crucial pointer for builders to move away from a narrow cultural chauvinism towards Indian traditions. To that extent, it was reformative. However, the synthesis were to evolve, was far from rejecting overt allusion to the monumental styles of the past, added a resounding new dimension to historicist eclecticism in a truly imperial style.

The energetic Governor, Sir Bartle Frere of which Scott’s buildings were so significant a product, launched a public building campaign in Bombay in the second half of the 1860’s. The campaign opened with the Decorated Gothic scheme for the rebuilding of St. Thomas’s Cathedral by the Government Architect, James Trubshawe. This was only partially realized, but Trubshawe made a weighty contribution, in collaboration with W. Paris, in the General Post and Telegraph Office of 1872.

Of other landmarks produced by the campaign, William Emerson’s Crawford Markets – in an elementary northern Gothic delineated in the various coloured stones, which contributed so much to the success of the Gothic Revival in Bombay – reflected the ideals of the early design reformers at home more nearly than any other prominent Anglo-Indian building of the period.

For the Public Works Secretariat, Colonel Henry St Clair Wilkins, Royal Engineers, followed Scott’s lead with a Venetian Gothic design in 1877 and his colleague Colonel John Fuller mixed Venetian and early English for the stupendous High Court of 1879. The culminating masterpieces of the series, increasingly hybrid in style, are Frederick Stevens’ works, especially Victoria Terminus, the headquarters of the Great Indian Peninsular Railway.

Other famous landmarks in Mumbai are the Gateway of India. This huge arch commemorates the visit of King George V to India in 1911. The original white plaster design was replaced in 1927 by an arch of yellow stone in a mixture of Gujarati, Islamic, and European architectural styles. Other public buildings in Western neoclassical style include the Mint and the Town Hall.

While the attention of Scott and his Bombay followers was focused on Venice, the Government Architect Walter Granville ruptured the Classical decorum of Calcutta with an excursion into the arena favoured by Street at home and based the construction of Calcutta High Court (1872) on the Cloth Hall at Ypres. He also showed his versatility – not only at turning a corner – in the splendid General Post Office which, if classical in the purity of its forms, is certainly Baroque in scale and movement. For the Victoria Memorial at the other end of the Maidan, William Emerson embarked upon a quixotic attempt to rival the Taj Mahal. It was built of a similar luscious material but the alien forms, extruded from post-Bramante schemes for St Peter’s, Rome, hover between Mannerist and Baroque.

The Victoria Memorial, built between 1906 and 1921, is a huge structure in the Renaissance style, faced with white marble. It seeks to mingle classical, Western, and Mughal influences. The memorial contains Queen Victoria’s piano and writing desk and a fine collection of portraits of Anglo-Indian leaders. Another interesting structure is the Ochterlony Monument, a granite column 46 metres high.

In Calcutta and Madras such are the mansions and club houses of Chowringhi and Adyar, respectively, with their high ceilings and verandahs. Native merchants went even further with their houses. Most spectacular by far, is the Zimindari Mullick’s ‘Marble Palace’ in Calcutta, with its astonishing classical interpretation of diwan and court.

Many imposing structures still stand as monuments to British rule in India. They include the Raj Bhavan, the official residence of the governor of the state of West Bengal, which was modelled on Kedleston Hall, a great house in Derbyshire, in the United Kingdom. The Writers’ Building, a civil service headquarters, and the High Court are fine buildings in the Gothic style. The General Post Office and the Town Hall are built in neoclassical style.