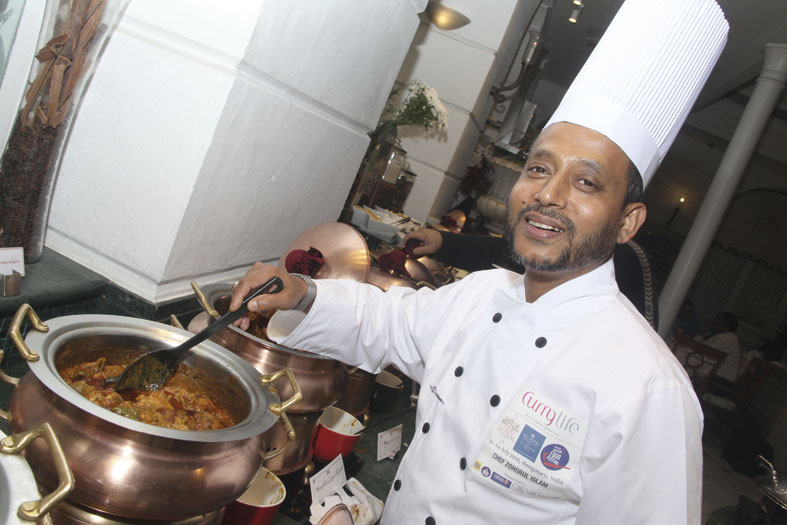 SECRET IS IN THE SPICE

“My secret is in the spice.” And for multi award winning County Durham chef, Syed Zohorul Islam, that magic mix won him another spectacular accolade as he was recently traveling to Kolkata (formerly known as Calcutta) India, as part of the Taste of Britain Curry Festival team.

That accolade came for the Executive Chef at the Capital restaurant in Durham while he was flying the flag for the British Curry from the North East of England at the Raaj Kutir Hotel, Kolkata, India, where he and three other curry chefs showcased their Best of British popular high street favourite dishes in the city where the curry trail of Great Britain originally started from.

Syed, 56, at this prestigious food festival served up a variety of dishes – his speciality lamb, chicken, duck and fish dishes. Of course the classics favourites such as Chicken Tikka masala, Zalfrezi and Balti dishes were also on the menu.

With a string of prestigious awards under his belt, his passion for cooking, inventiveness and creativity has taken him to British curry promotion from London to Ljubljana, Manchester to Madrid and Durham to Dhaka.

From his grandmother’s humble home in Sylhet, Bangladesh, where he first discovered his love of cooking. Syed has steadily climbed the ladder of success since coming to England at the age of 16, learning his trade at his uncle’s restaurant in Sunderland – the city which is home to him, his wife and family of five.

But he says of his latest trip to Kolkata, India, where he was a part of the Taste of Britain Curry Festival team was “a real challenge.”

That’s because as he explained: “Kolkata was once the proud capital of the British Raj in India and it also has a big Anglo-Indian community and of course this is a city which was home for Nobel Laureate Mother Theresa.

“We gave our diners the best of British. The diners of the city of Kolkata are not unfamiliar with British tradition and culture, so we all had to do our very best and something different.

“We had a great team to India this time. I have really enjoyed working with Michelin Star chef Mark Poynton from Cambridge, who was part of the delegation. It is always a pleasure to work with a chef from the mainstream of British food scene. I have already started to experiment with some of chef Mark’s recipes from the Cambridgeshire Cookbook he presented to me.”

Syed is immensely proud of his achievements as a chef. His restaurant the Capital is based in the Claypath of Durham, stone through away from the University of Durham and Durham Cathedral.

As this is a top university city many of his Restaurant customers are students and visitors to this great historic city.

Syed has an enthusiastic team to ensure all his diners are treated with best food and services.

Syed says, “to run a good restaurant you need a top team. And if you have a top team then you have a top restaurant “Because of the great team effort for past 18 years, the Capital Restaurant has gained a dedicated following of customers who travel regularly from Newcastle, Middlesbrough, Sunderland, Washington even from Stockton on Tees.”

The most popular dish at the Capital is Zalfrezi because it’s not too hot and not too mild yet with a little kick. However, from every September like new in takes at the University, new dishes are added on the menu and a selection of main courses rotated with the seasons, giving customers fresh delights to tickle their taste buds.

The Capital Restaurant is very much a family business with his nephew and business partner Shibir Miah, managing Front House and overall business.

Syed Islam and Shibir Miah have together replicated success of the Capital Restaurant a mere stone’s throw away in the city’s Market Place where they are also running The Spice Lounge restaurant.

The hallmark of this innovative chef’s success is all down to the fact that he is always “thinking and experimenting.” And that has also won him an enviable reputation as a first class wedding cook, catering for hundreds of people at a time throughout the North East of England.

Shibir Miah, says: “He is very passionate about what he does and he loves coming up with new dishes and he is very consistent in his cooking as well.”

Such success is all down to his skilful cooking, impressive creativity and of course that secret spice mix, of which Syed says: “It’s a secret I can’t tell.”