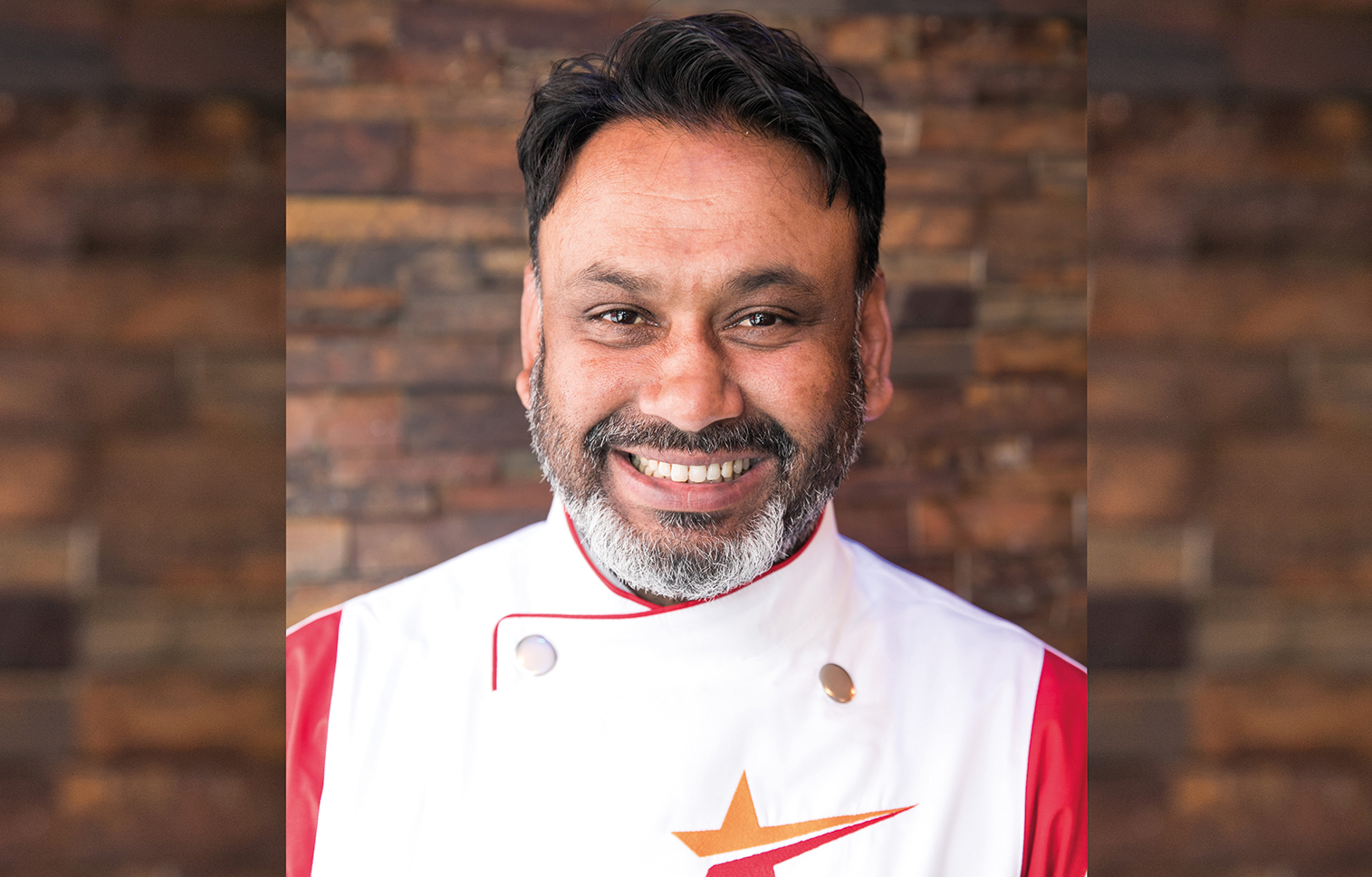 THE SOUL OF A COMMUNITY I-Naga Restaurant

The last few months have been undeniably challenging for the restaurant industry, with lockdowns and tier changes creating a rollercoaster of openings and closings across the country. Every day brings more stories of the ruin of businesses that have been years in the making and apprehension about the future. Deep in South London, however, is a heart-warming success story thanks, in part, to the huge affection and respect it holds in its local community. I-Naga, in West Wickham, a short drive from bustling Bromley town centre, is the lovechild of British-Bangladeshi chef Abdul Hay and is known for both its award-winning menu and charismatic owner who is somewhat of a celebrity in local circles.

The 43-year old entrepreneur opened the contemporary curry house 10 years ago after ‘the existing restaurant had fallen into a bad way.’ According to Abdul. ‘I saw the potential and wanted to rescue it. I was able to buy the place for a song which made it possible and have not looked back’. Having been born in Sylhet in eastern Bangladesh, Abdul arrived with his parents aged three and cut his teeth in the curry trade working at his older brother’s takeaway in East London. Now married to housewife Nargis and the father of 4 sons, aged between 6 and 18, Abdul commutes tirelessly each day from his home in Bethnal Green, ‘seven days a week and nearly every day of the year’.

Bangladeshi cuisine has long been associated with the thriving ‘bhuna and beer’ cultures of Brick Lane and Birmingham, so beloved by British office parties and stag dos. However, Abdul has, in this traditional corner of the London suburbs, been quietly elevating his ancestral food to a whole other level. ‘I grew up, and still live in Tower Hamlets, the heart of the Bengali curry industry in the capital,’ reflects Abdul. ‘I saw how the local restaurants diluted their heritage to suit British tastes and, while I understand it in my head, my heart wanted to create a curry house that would not compromise but would win over my diners by sheer quality and taste.’

This approach, infused with authenticity and passion, has clearly paid off. A short time after opening, the restaurant was the very first in Bromley to hold a five-star hygiene rating. Within a year, it had won its first Curry Life award and I-Naga’s Head Chef, Abab Miah, has been the winner of Curry Life’s Curry Chef Of The Year award for four consecutive years. I-Naga was described to me by the editor of this magazine as ‘probably my favourite curry house in the country. I even missed it when I was working in Delhi’. High praise indeed, so I started the journey from my West London home with high expectations.

Arriving on a rainy evening, I was immediately enveloped in Abdul’s warmth as a host. It felt as though I had walked into his own family home and was being treated as a long-lost friend. ‘When I open my doors at 5pm’, agrees Abdul, ‘I am opening my doors to my guests and cannot help but treat them as though they are sitting at my own table’. Meaningful engagement, however fleeting, is so valued in our current times. Diners, starved of much of their usual social interactions, will be more appreciative than ever of a warm welcome and a personal touch. Abdul has this in spades and, in a relatively recent timespan, has built a devoted following. This was evident in the stream of takeaway collections as I sat down to my table, the only diner in the closed restaurant. The staff seemed to know most people by name and orders were interspersed by cheerful enquiries into relatives’ health and Christmas plans. After months of social distancing and isolation being pressed on us in the fight against Covid, this atmosphere of authentic community is sure to be in demand. Who wants sterile formality and insincere service after what we have all been through?

Abdul is proud of his standing in the community, forged through both I-Naga’s popularity and his tireless giving back to the area. ‘I take great pleasure in sponsoring most of the local sports teams’, says Abdul, ‘I contribute a significant amount of money each year to them because I know such activities are crucial to keeping a community alive and thriving.’ I also hear about the restaurant’s feeding of NHS staff in the A & E department of the nearby Princess Royal University Hospital and providing lunches for local schools, including a regular buffet meal for school children.

They say what goes around comes around and the restaurant owner certainly had a taste of this after a burglary last year. ‘The local response was overwhelming. It still blows my mind’, reflects Abdul, ‘I refused a kind offer of a GoFundMe page being set up and so the locals began to flood the restaurant, I mean queues out the door. One man ordered food from me for 14 days straight, admittedly by the 12th day, he laughed about a curry overload!’. ‘I will always be grateful to our neighbourhood for that time which showed me the power of human kindness like nothing else. I am just a regular guy with a dream but God is definitely watching over me’.

Abdul cites inspirations such as Gordon Ramsay as examples of a fearless drive achieving anything. But there is no doubt he also puts the graft in: ‘Nearly every dish that leaves my kitchen is seen by me. I know this to be a secret to success. I also refuse to use anything but the highest quality ingredients. My chicken is from a Smithfield Market butcher, the freshest anywhere, the lamb is from New Zealand and basmati rice is only Tilda. Yes, it may cost more, but you know in the first bite what you are being given.’

The recently refurbished dining room of I-Naga is pleasingly spare, a refined canvas for the colourful dishes on the menu. The long dining room, with divided tables that feel suitably safe, is decorated in a neutral palette complemented by glamorous lighting and crisp, heavy white table linen. The bar is well stocked against lit-up glass and the whole effect is quietly luxurious without being flashy. With a flourish Abdul produces the menu – the scope of which is immediately eye-catching and talks me through some of his highlights. The salmon tikka is, according to the chef, ‘mouth-wateringly good’, and a quick Google reveals his public feel much the same. Sadly, I am allergic to fish and so had to pass on this delight but Abdul assured me even better was to come. And how right he was! Full disclosure, I have lived or travelled in India for nearly 20 years and I have never experienced a poppadom like the one that was produced as an amuse bouche by a smiling Abdul. A thin soft ‘papad’ was covered in a vibrant layer of tamarind, crispy red onion, channa and, even, the crunch of Bombay Mix. I could only stare at it for a few minutes in interest and slight suspicion before the first (incredible) mouthful. Safe to say, I will never be satisfied by a bare naked poppadom again after this explosion of taste, tanginess and creativity. One of the great crimes of mid-range Indian restaurants in the UK is a complete absence of surprise. This is where I-Naga is leading the field and raising the bar for curry houses everywhere.

Having thought we might have peaked with the fully-loaded poppadom, the next course, a petite plate of smoky rich red Chicken Tikka, topped with a voluptuous king prawn (although sadly I could not eat this)  and caramelised sweet onion brought everything crashing to a halt. Even allowing for the gastronomic banality of lockdown life, that delicate starter was, hands down, the best thing I ate in 2020. Such a familiar dish, one that I have indulged in in palaces, dhabas and streetcarts, from Lahore to Kolkata, and yet here in the fringes of Bromley, I find the most exquisite example of it I can remember. Subtle and delectable like the courtesan Pakeezah herself. As a non-driver, Google Maps tells me it is 1 hour 9 minutes, taking in a tube, overground train and suburban bus, from my front door to I-Naga. That is a journey I would willingly do again and again, in all weathers, for this one, transcending, starter.

Abdul and his team are extremely attentive but keep the balance just right allowing space for the dining experience while never more than a smile away. Still coming down to earth from the tikka, I was ushered into another taste realm, with a flaky rolled paratha filled with meltingly tender spiced lamb. The changing of gears worked well and the lamb was warm, comforting and as though it might have been cooked in a clay tandoor for 24 hours. It felt like sitting at dusk in a wood-smoked North Indian village watching the fields and mango trees, it felt like being a prized guest, it felt like celebration, it felt like home. I was beginning to see the strength and magic of I-Naga, it takes the diner on a journey through these small plates of storytelling. For the British, it will be Jewel-in-the-Crown, Golden-Triangle exotic while for the South Asian diaspora, it is nostalgia, the daadi on a charpoy shelling beans, soul food. Either way, Abdul has built so much more than a restaurant on this corner of Croydon Road. It is a magic carpet.

Beaten-brass karahi dishes come out laden with Anglo-Indian Chicken Curry, thick, mildly spiced and aromatic – I can easily imagine ayahs feeding it to plump children of the Indian Raj – and perfectly flavoured basmati rice. Wanting to explore further into Abdul’s local heritage on the menu, I requested one of the chef’s signature dishes, a fiery Garlic Chicken Tikka, in a velvety sauce – it did not disappoint and was a perfect high note to a memorable meal. Dessert was a sweet tongue refresher in the form of Pistachio-infused kulfi, as creamy and fresh as anything served on Chowpatty beach at sunset.

Abdul likes to say that ‘a good customer will never leave a bad review; if he is unhappy with a meal and feels he has been undersold, he simply won’t return.’ There is no danger of that from this reviewer – I am already looking forward to going back and sampling Abdul’s original homestyle Bengali Chicken Korma, in which according to the chef, ‘there are no coconut or almonds, the ghee does all the talking and you haven’t lived until you’ve tried it’. This year will see Abdul launching a weekly Bengali curry night and bringing more secrets from his family kitchen to lucky diners. 2021 is looking up already.