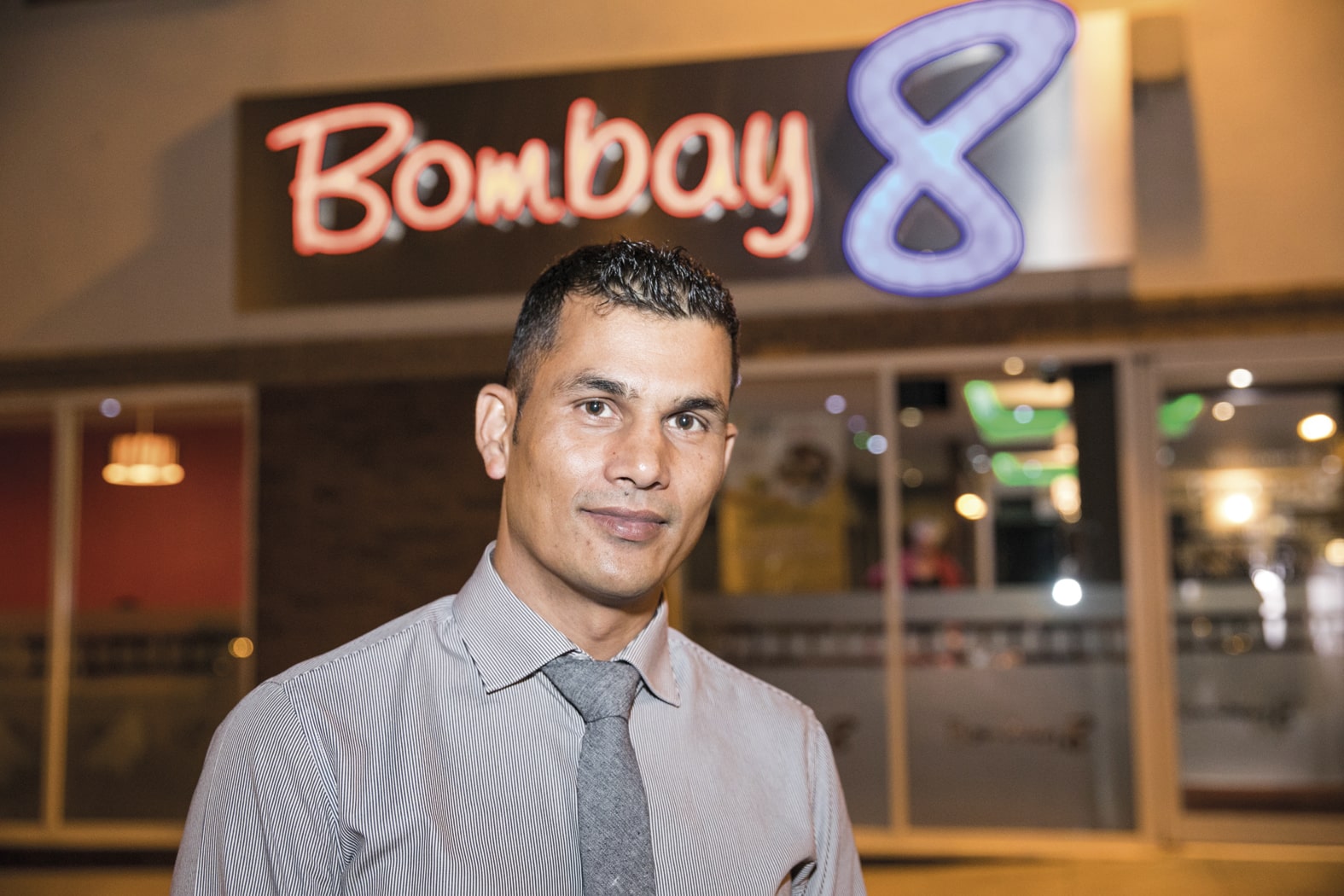 Bombay 8 – A Gamble Paid Off

Bombay 8. A beautiful restaurant in Warrington.Very good food and decor. Customers love it. Our reporter Sam Smith talks to owner Mofozul Miah and writes about their delicious food and the secret to their success.

Restaurant owner Mofozul Miah took a gamble when he opened an independent Indian restaurant on a Warrington’s retail park full of name branded restaurant chains. The competition was fierce, but ultimately the gamble paid off.

Today Bombay 8 stands shoulder to shoulder with any of its competitors and is highly regarded by locals and shoppers that visit the area. Located near a large Ikea and various other shopping outlets, Bombay 8 offers customers freshly prepared Indian & Bangladeshi dishes of exceptional quality.

The restaurant takes advantage of passing shopper trade, but primarily provides curry for a loyal group of regular customers who come from all over the area to sample it’s recipes. In fact, the restaurant is directly below a Travel Lodge hotel, meaning the occasional weary business customers visit the restaurant, drawn by the smell of the cooking.

“We see them all the time” Says Mofozul, “They come down from the hotel, experience our food and then decide this will be where they stay every time they visit. Just so they can eat here again. They usually bring their colleagues too.”

“It also saves them from venturing out into the town for food. They stay at the Travel Lodge, eat here, then often go over the road to the pub for a few drinks afterwards!”

“I like to employ extra staff on each shift. It’s more expensive I know, but it’s better to have too many people than not enough. A poorly staffed restaurant usually suffers from a customer service point of view. I never wanted that to be the case here. It’s an investment at the end of the day, an investment in people.”

Bombay 8 wasn’t the first restaurant that Mofozul owned, he previously ran one called the Golden Viceroy, but said his heart wasn’t in it. It wasn’t until he opened Bombay 8 with his business partner that he truly felt accomplished.

“I can safely say my heart is in it now. This is just right. My best friend and my wife really helped me get to where I needed to be with this restaurant. So I’d like to thank them both. I’ve always been an entrepreneur; you see I was always more of a grafter than a natural academic. But Bombay 8 is where things really fell into place.”

After learning the history of Bombay 8 we were looking forward to experiencing the food. The establishment has a reputation for quality and freshness and is one of those Indian restaurants that’s simply on another level to what most people know. At Curry Life we believe it’s our mission to identify these restaurants and feature them in the magazine.

As we often do, we asked Mofozul what he would recommend. He advised us to order from the Chefs Specialities part of the menu, telling us that each dish was carefully crafted to stand out from the rest. So that’s exactly what we did.

Each member of our party had different tastes when it came to curry, so we ordered a range of dishes in an effort to experience the full spectrum of the chef’s talents. Every single meal exceeded our expectations considerably. We knew we were in for a treat, but they still managed to surprise us.

We also ordered a Bombay special mixed started along with the vegetarian version too. This allowed us to try a range of different meats and other appetisers such as onion bhajis and vegetable samosas. Naturally, we also ordered a round of Cobra Beer too.

For our main meals the first one we ordered was the Chicken and Malai Kofta. We were expecting this to me similar to the kofta that was served as a starter, just a more significant portion. But instead we were pleasantly surprised by its presentation – and even more so by the taste.

At first glance, the meal looked more like an Italian dish, due to the red curry sauce, meatballs and cheese. But upon trying the sauce and recognising the tandoori herbs and spices, we realised that this dish was indeed distinctly Indian/Bangladeshi. If you’re someone who cannot decide between chicken and lamb and wishes to try something unique – this will be for you.

The next dish we ordered was the Lamb Chilli Fry, pieces of lamb pan cooked with green chilli, mixed peppers, sweet chilli sauce, onions and coriander along with a salad garnish. This was simply superb and will be the dish we’ll all order when we next visit Bombay 8. It was also just the right level of spice. The member of our party who ordered it described it as “the best curry he’s ever had” – And he eats plenty of it!

The next two dishes we ordered were the Malibu Chicken and the Moducash Murgh. Both were mild creamy chicken dishes. If you’re the sort of person who likes to order a korma or a pasanda, we’d recommend you try one of these dishes instead. The Malibu Chicken contains coconut like a korma, while the Moducash Murgh is made with mango and cashew nuts and is similar to a quality pasanda.

Before we arrived, we discussed our love of king prawns with Mofozul on the telephone, but we didn’t actually order a dish containing any when we looked at a menu. We were enticed by other dishes instead. Mofozul had planned to cook us a King Prawn Palak, as it’s one of the restaurants signature dishes. So when our main meals came, he brought us one of these as an extra.

We’re glad he did, each king prawn was mouth wateringly marinated in tandoori spices and barbecued to perfection. It was a wonderful addition to our meal, and we’d order it again in a heartbeat. It was cooked to absolute perfection.

We visited Bombay 8 as the UK lockdown was easing, so we asked Mofozul about the impact of COVID-19 on his business. He told us that he closed for four weeks while they planned what to do, but then reopened as a takeaway only service. His suppliers all increased their prices, but Mofozul decided against doing this himself, believing it would be unfair on his customers.

He told us that as frustrating as this was, ultimately it was better to keep prices where they were and absorb the cost. As any increase in price risked putting customers off visiting. However, he did tell us the government’s bounce back loans and support have helped.

Mofozul also told us about how he was able to keep employing all his staff, “I encouraged my team to share shifts between them. This was preferable to making any redundant or furloughing them. This way they could each work, just sadly less hours than normal.”

Although he did permit his staff to get a second job if they needed one. Promising to help them adjust their hours to accommodate both jobs. This allowed him to keep all his staff employed and not lose anyone.

We asked Mofozul about the Eat Out to Help Out scheme, specifically if he was using it and if it had been helpful. The answer we received surprised us very much.

“I didn’t take part in the Eat Out to Help Out scheme. I considered it very carefully but, in the end, I chose not to take it up.” Bombay 8 was the first restaurant we had visited that had decided against using the government scheme, so we asked Mofozul to tell us why he reached that decision.

“I felt it just wasn’t right for our regular customers. Let me explain, our regulars know they are always welcome. They will always have a table here. We know them and they know us. The Eat Out scheme meant that restaurants were incredibly busy. This is great for the industry, but the problem for us is that it meant we’d risk needing to turn away loyal repeat customers.”

He went on to say, “If we were too busy, we’d struggle to offer them what we usually do. This virus will be gone one day, and so will the government measures to help restaurants. When that happens, I wanted to make sure my regular customers knew we were still there for them.”

“My regulars love our curries, once they were free to go to restaurants again, we knew they’d want to visit us. The idea of us being too full to accommodate them simply wasn’t worth doing. Yes, we could have filled our tables and taken advantage of the scheme, but in the long term, we would have risked alienating those who really valued and stuck by us.”

“Getting a table anywhere during the scheme was difficult. We’ve actually managed to cater for a number of people who may not have visited us otherwise. Their regular favourite restaurants were fully booked, but when they came to us, we were able to fit them in. They were grateful and will now visit again.”

“You’ve got to realise what’s really important in times like these. To me, that’s family and that’s how we see our customers.”