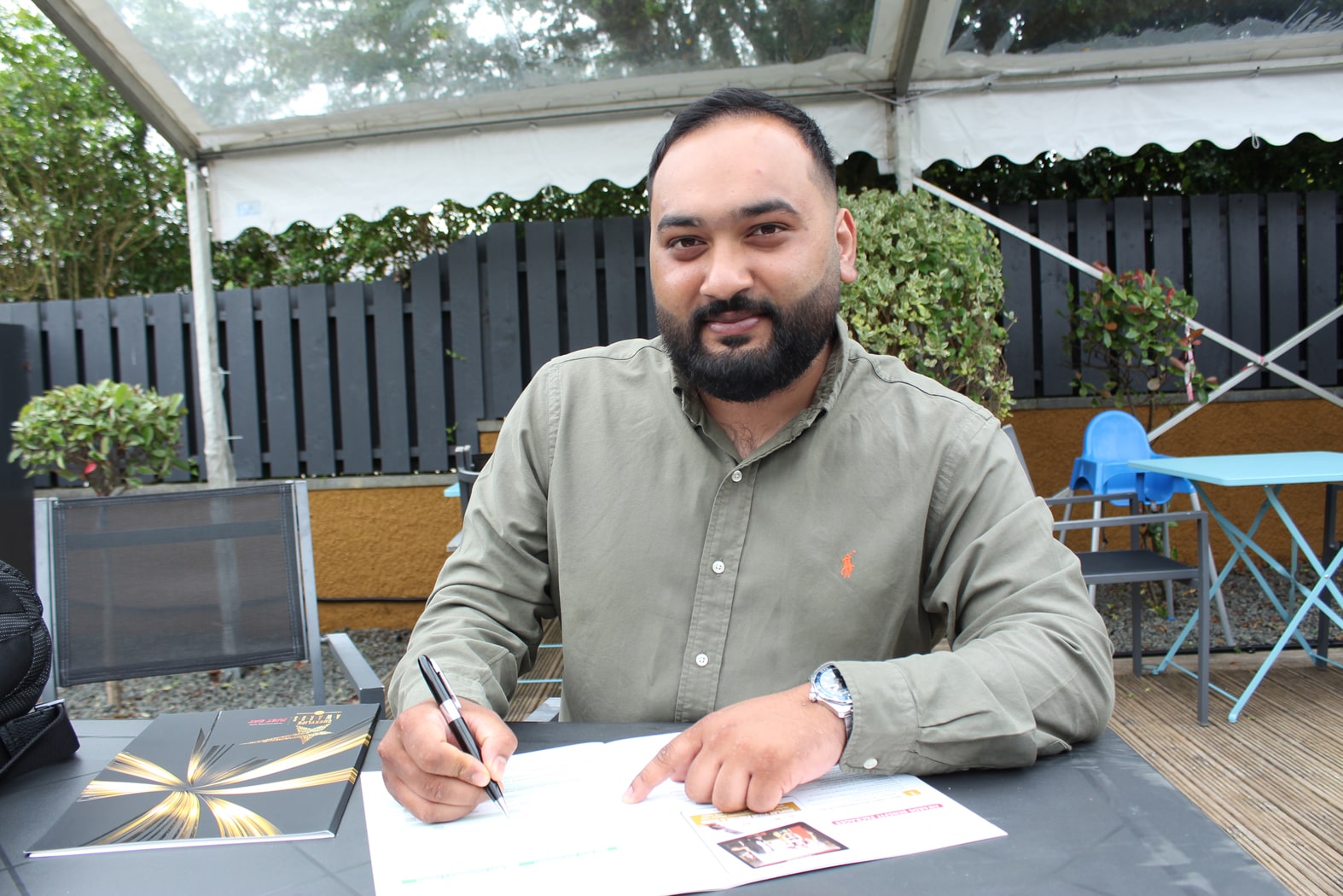 Habibur Khan, a 23-year-old young curry entrepreneur. His father Matin Khan is also an established businessman who has been involved with restaurant trade since 1998. They have two family establishments in Edinburgh, Scotland are the Itihaas Restaurant in Dalkeith and the Radhuni Restaurant in Lonehead. Habibur Khan is at the helm of very popular restaurant Radhuni. This young “Curry King” from Edinburgh talks about his success story with Syed Nahas Pasha, Editor-in-Chief of Curry Life Magazine.

“I work as an accountant in my day job, but I see the restaurant as my future. I like to make everyone happy; I like to manage; when providing service and food to customers, their smiles is what drives me.”

Habibur Khan, otherwise known as ‘Scotland’s youngest curry king’, has a lot on his plate. The 23-year old divides his time between his conventional 9-5 job with managing the award-winning Radhuni, a 150-seat restaurant located in Loanhead on the fringes of Edinburgh. “In the area it’s what I’m known for: having a 9-5 job and working 5-12 in the restaurant; I’m almost working 24/7. But I enjoy it – I love it – and without it, I don’t know what I would be doing.”

With Habibur firmly at the helm as Radhuni’s managing partner, the Indian-Bangladeshi restaurant, nearing its 10-year anniversary, has picked up notable accolades. Despite the praise Radhuni has garnered, though, Habibur remains determined not to be complacent in his role, and proves to be exceedingly determined, motivated and committed to working in the industry.

“I grew up with many of my family working in restaurants, so I grew an emotional attachment to them. Growing up, I was told not to come near the restaurant so it wouldn’t affect my studies, but I’d always find an excuse to visit; I’d miss the last hour of school and come without anyone knowing. I saw it as helping myself to help the restaurant, because I just loved it.”

At the age of 12, Habibur officially started working at the restaurant, though he wasn’t too keen on his first role. “My dad put me in the back because I wasn’t tall enough. After three or four weeks of washing dishes, I thought no, I’m going out in the front, the back is not for me.” Once he was out in the front, customers would bear witness to Habibur, in his own words, ‘running around like a headless chicken’: “It was fun working whilst still being at school; my friends couldn’t believe it. They would come in and eat with the family and find me working. It’s an opportunity not everyone gets, so I was very lucky to have it.”

Habibur’s enduring love for hospitality undoubtedly stems from his father’s long-standing involvement in the industry, who himself has been running takeaways and restaurants in Edinburgh for almost 30 years.  “I do want my father to retire, he’s been doing it for a long period of time, but there’s still lots to learn from him. There’s no end to learning; he’s probably said things to me four, five years ago and I probably thought, ‘what are you talking about’, but as the time goes on, I realise why he said it. Basic things can end up meaning a lot.”

And what’s the best thing Habibur has learnt from his father’s expertise in the trade? “There is one thing he taught me which I still talk about: a good waiter will not only serve one table, but on his way back, he will always bring something else back to the bar to make his night easier. If I was to go to a table and serve, that’s not my job finished. There are other tables around, so you make sure you pick something else up – why should I leave it for someone else?”

Surprisingly, Habibur claims his father wasn’t too favourable of his son working in restaurants at a young age, and to this day remains sceptical: “he didn’t like me working from a young age, and he still doesn’t like it now. He says it’s not a business you want to get into due to the manual labour. It’s unsociable hours, but if you build a good team, these things go away. With any business you need to put in the hours, even if you’re not getting paid. Once you’ve put in the investment it all pays off. But you need a lot of patience, to believe in yourself and believe in the business.”

What does Habibur have to say, then, to the younger generation who may feel obliged, but not necessarily enticed, by the idea of taking over the reins of their family’s restaurants?

“My message would be come in and see for yourself how you can drive it forward. You might come in and adjust things that’s going to change the whole concept of running a business; you could make it easier for you or your family to run. Bring in something new that’s going to help the business, fresh ideas, a fresh motive, and see if there’s a gap in the market. If you see it, then trade is always there.”

As the city of Edinburgh has been witness to many changes over the years, Habibur states food trends have stayed relatively stagnant: “I don’t think trends have changed much. Customers are sticking to what they know; authentic Indian curry houses are still very popular in the area. In terms of change, the only thing you can change is how the décor looks, or the quality of chicken, lamb or spices – if you’re selling the top notch of everything, more customers will come to you.”

It’s perhaps no surprise, then, that Radhuni’s most popular dishes are the more conventional among the British: “Bhuna, Madras, Dhansak, they are the bread and butter of our menu. You must have them, because customers still love them. They are used to it and have been for many generations. If you don’t have them in the restaurant, 70% of your trade is gone.”

Does this mean Chicken Korma remains the UK’s no.1 curry? “Yes, it’s the most famous talked about curry, it still is,” Habibur says. “Our customers still love a Korma, Chicken Tikka Masala, Balti, these are still popular curries. Without them, I wouldn’t be able to run my restaurant – customers would start asking me ‘is this an Indian?’”

In today’s current climate, Habibur acknowledges how essential keeping up with the trends is to survival: “everything has moved over to social media, that’s where there’s presence, plus it doesn’t cost you anything. All it takes is a bit of research and knowing your customers. It’s all about what I call ‘organic growth’ – using Facebook, twitter, Instagram – you as a business should be using it too if it’s going to help your business.”

The need to invest in your staff is significant too, Habibur iterates: “we’ve got about 15 staff, and they are very important. Everybody talks about the staff crisis and how they can’t run restaurants; yes, there is a crisis coming from our countries – Bangladesh, India, Nepal, and Pakistan – but that doesn’t mean anything. What are people doing in the UK? They also have an interest in hospitality; we need to bring them in, give them the chance, teach and train them and they’ll be just as good.”

Keeping ahead of the game is equally vital for Habibur: “For us and the new generation who are stepping into the game, you have to see what the gap in the market is and look at what others are doing that you’re not doing. It’s not about copying them, it’s about how you can do it better. If everybody does the same thing, everyone remains the same, so how can you trade something new with a twist that your customers will love? If you invest in your kitchen, they invest back at you because you’ll get money back in return. If you’re making £500 profit a week, put £200 away for a rainy day, and another £200 for yourself. It’s not all about profit. Invest in your staff, invest in business.”

In order to keep business healthy, then, do fellow restaurateurs freely exchange ideas? Habibur sees the benefit in doing so: “I do this all the time. Like I said, there’s never a stop to learning. I could be doing something wrong – which I think I’m doing right – then my friend will tell me how it should be. So, we are always learning from one another and giving each other ideas, and there’s nothing wrong with that. As long as you’re learning that’s the main thing, because that’s what makes you better. One person can’t know everything about a business; you have to take ideas from everyone, put it together and change it to how it works for you and your customers.”­­

So, there is nothing to fear from a bit of healthy competition? “I don’t have any fear about competition. My only fear would be if someone was to come along and do the exact same thing as me. But as I said I’m always learning. Let them do the same, hopefully I can then make my product better.”

To help bring in fresh ideas, Habibur admits to eating out two, three times a week, much to the annoyance of some: “My friends who are not in the game, they hate eating out with me, because I am always so observant with everything. They say: ‘you never take a break’, but for me I’m learning something new!”

The Coronavirus pandemic has undoubtedly put further strain on an already struggling sector, and with a recession and unemployment looming, there is mounting uncertainty on the survival of many restaurants. But how was the last six months for Radhuni? “We are a restaurant and takeaway, and 70% of our sales were from the restaurant. Obviously, we had to close down. We had to adapt very quickly from running as a restaurant to takeaway only, which meant reducing opening hours and staff. Initially I was scared, because I didn’t want to let go of the great asset that we have, but then I thought, if everywhere is closed, where are the doctors and nurses going to eat once they finish their shift? They can’t afford to lose time standing at a supermarket. So, I decided to stay open to feed those who are saving us, and because we were getting almost hundreds of orders in from the local hospital, the police force, fire station, it turned out that I needed all my staff there. We all help each other, and we were lucky to be running the business as well.”

After an ostensibly successful attempt to survive lockdown from a business perspective, how does Habibur plan to move forward, bearing in mind the country’s uncertain future? “I’m not cutting down any staff. Because of the extra measures we’ve put in place, our hygiene is good anyway, and I want to take the bar up and see what else I could be doing. In order to do better, I need more pair of hands to help me. So, I’m not cutting down on anyone at the moment.”

Though Habibur certainly hopes for expansion down the line, he reiterates how important timing is for the business: “Let’s see where the current climate is first. There’s always opportunities coming up, but it needs to be the right opportunity, so fingers crossed.”

Our fingers are certainly crossed too. Taking into consideration everything that’s happened this year, does Habibur believe there’s still money to be made in the trade? “There is, but it doesn’t come to you. You need to put the hard work in first. You put it in, and you see the rewards – the harder work you put in the more reward you get, even it means waiting for six months… you’ll soon get the reward.”