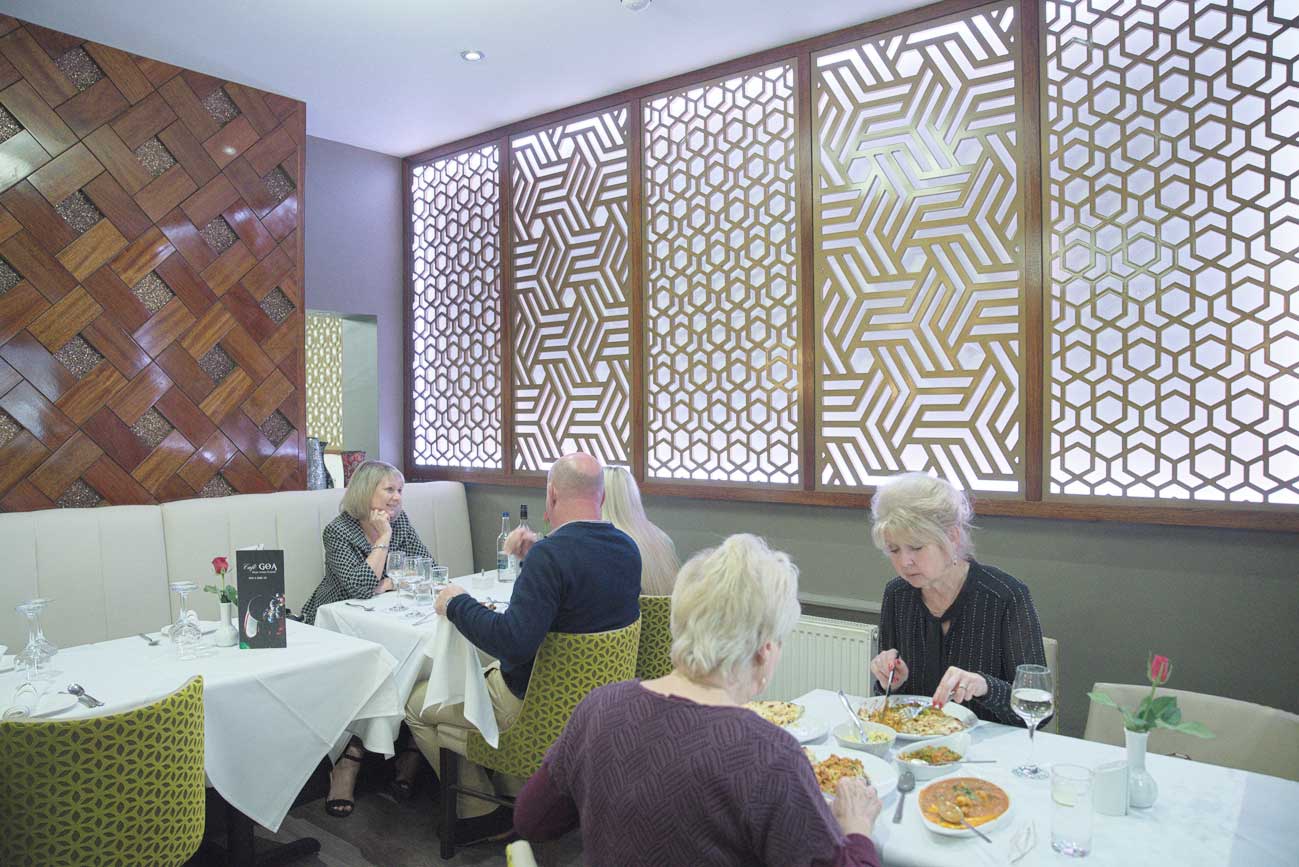 A recognised figure in the British Bangladeshi community, Shahanoor Khan is on a mission to get more youngsters involved in the curry industry and make it flourish once again. His latest venture, Café Goa in Barton-le-Clay, was undertaken in response to changing customer demands and revive a traditional curry house, using modern technology, light and décor.

Shahanoor Khan is a well-known figure in the British-Bangladeshi community, admired for his dedication and contribution to longstanding caterers’ associations, which work on challenges in the curry industry. He is the former Secretary General of the British Bangladeshi Caterers’ Association, a platform established in 2015 to unite the curry industry, stimulate creative thinking and confront issues of the day.

Shahanoor’s children – sons Nawaz Sharif and Nibras Abid; and daughter Nafisa Tasnina were born and brought up in London. Nawaz, the eldest of them all, works in the same business as his father while Nibras is completing an apprenticeship. Nafisa will be graduating in Game Development from Kingston University this October.

As a child, Nawaz always aspired to be like his father Shahanoor Khan. At 28, he is elated to be working alongside, at their renowned restaurant Café Goa in Barton-le-Clay, a village in Bedfordshire. The father-son duo shares an incredible relationship learning from each other’s experience, knowledge and skills. “I am delighted to be working with my father. I learn something new from him every day and he’s always there to guide me,” says Naz, as he’s popularly known among friends and family.

The decision though to join his father’s restaurant business was not straightforward. It came after years of persuasion. After his schooling in Maida Vale, like his peers, Naz wanted to take the long hard road of going through job applications and interviews before he settled for what he really wanted to do. He started his career as a pharmacist and then moved on to the retail industry, working as a manager in House of Fraser, Central London. His next stint was as an account manager in a medical recruitment agency. Then, after all those jobs, he was eventually convinced by his dad to work for himself.

Café Goa was taken over in January 2016 as the previous owners faced difficulty in running the business. The 80-cover restaurant has recently undergone a massive refurbishment resulting in an exquisite, fine-dining space, giving it a modern contemporary look. With the new look, the ambience is pleasant and comfortable for family dinners or fun evenings with friends. The menu captures the essence of food in India with an innovative touch. All the food at Café Goa is freshly prepared using finest ingredients and quality produce.

The Chicken Irangani, a dish cooked with spiced ginger in a rich sauce and seasoned with natural honey, was absolutely delicious and highly recommended. Another popular dish, which is also a unique speciality is Naz Special, a lamb dish prepared in a homemade bhuna style. If you prefer a creamy sauce, Chicken/lamb Badami is the chef’s recommendation as it’s cooked with spices, nuts and is medium-mild in terms of heat.

The credit for these special dishes goes to their award-winning head chef Saifuzzaman Khan, who’s been in the profession for 18 years now. “I am very keen to try different dishes, and experiment with new flavours and curries,” says Saifuzzaman, who is the creator of the unique dishes — Chicken/lamb Irangani, Badami, Naz Special and Murghi Massalam at Café Goa. “Kitchen job is difficult and highly stressful, but I love the challenge,” he adds.

Unlike other restaurateurs, Shahanoor’s experience has been slightly different after he moved to the UK in 1980s. Though he took up a part-time job as a waiter during his initial student days in London, on completion of his studies, he started a small firm to carry out documentation and paper work for visa purpose, filling forms and applications.

The next venture was a joint business with his brother, where they opened a restaurant in North London. He then went on to start his own restaurant, The Balti House in Tower Hill, running it successfully for 15 years from 1992 to 2007. It was during that time development work commenced around Southwark, and he sold the restaurant.

His next project again was a restaurant in Weymouth. The theme was very interesting and unique then – following more of a street food concept but due to shortage of staff the restaurant was in business only for three years (2007 – 2010). Around the same time, he opened a Takeaway in Dulwich – Spice Republic, which is still under his ownership.

When asked which one he prefers more amongst his current ventures, “It’s got to be Café Goa. The ambience here is great and the customers are very friendly. It’s a small village, so everyone seems to know one another,” says Shahanoor.

Elaborating further, he says, “Both Dulwich and Barton le Clay have different crowds and cater to different kinds of people. Spice Republic is more casual, whereas this has more of a fine dining Indian restaurant feel.”

As the restaurant is located in a village, amidst the sprawling countryside, what are the chances of it being busy?    “Oh yes, Wednesday to Saturday the restaurant is very busy and so is the demand for takeaways. Some of our dishes are unique, which makes it different from other Indian restaurants,” the restaurateur adds.

“I am thinking of organising Bollywood nights. People around here are friendly and love socialising, so it will be a good entertainment for them as well. We have plans of hosting charity dinner events too at the restaurant. We recently signed up for a charity dinner for Cancer Research,” he reveals.

It doesn’t end there. Shahanoor has also sponsored Barton le Clay football team. During Christmas, the restaurant contributes to the village lighting.

Shahanoor is also the founding president of the European Probashi Bangladeshi Association EPBA, which has members from 28 European countries. The organisation was established in April 2016, to cater the community and industry demands and challenges in member nations. It helps in networking, building contacts and connections.

About the curry industry, he says, “Only if we encourage more youngsters to come into this industry, will this industry survive. In order to save the dying traditional curry house, we must adopt modern means and ways to help it survive. A lot of these changes comes along with newer and fresher ideas as curry business can be very lucrative, if given a bit of a spin around.”

The ratings and reviews of the restaurant are excellent on all platforms – Google, TripAdvisor and Facebook. “When we took over, the restaurant was almost in shambles – businesswise. We invested a lot of money to renovate the look, quality and service,” the restaurateur says.

Shahanoor is himself extremely cautious about allergens as his daughter Nafisa too is allergic to nuts and dairy products. “We have allergen signs present on the menu and ensure out waiters check with customers about any special requests. People here are generally very aware hence it’s not been a problem so far.”

The 60-year-old restaurateur wants to focus completely on his current venture and how to make the restaurant stand out. So, the expansion plans will have to wait for now.

For Naz, being a part of Café Goa is special and he has no regrets. But if he could change one thing what would it be? “I wish I was lured into this much earlier. If the older generation had brought us into the industry earlier and put more responsibilities on us, things would have been different. But I’m not complaining. I am passionate about my work and wish to continue with the same momentum, just as my dad,” he concludes.