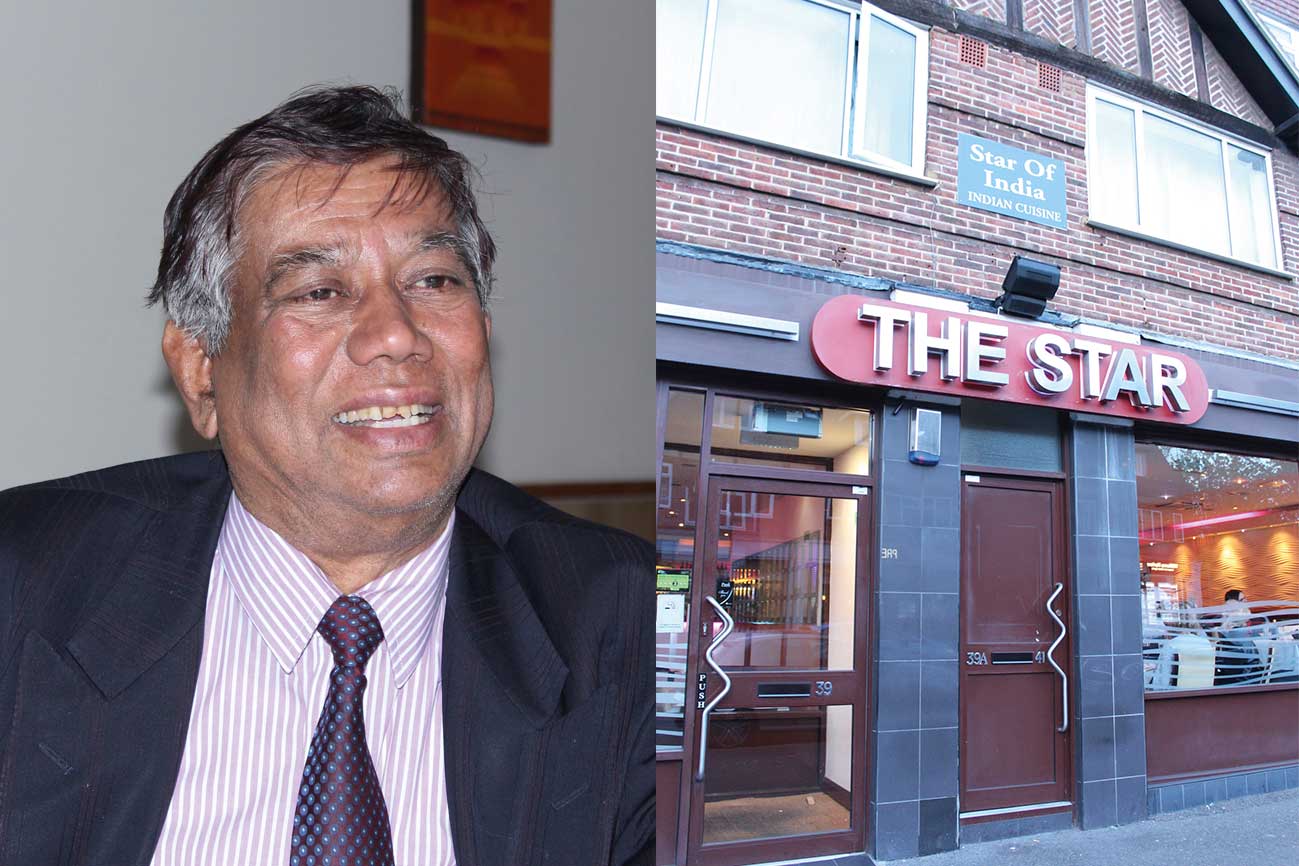 Arriving at Heathrow Airport in November 1962 after a long, exhausting flight from Dhaka is something Mr Abdul Malik will always remember. The flight to London was via what was known as West Pakistan and he was barely a little over 16 years of age. “It was cold and I vividly remember I took a black taxi and went straight to the address in Sussex Garden, given by my relative. After staying there for about five weeks, I took up a room in a flat share with some Spanish housemates in Kingston,” he recalls.

Malik, who is the owner of Star of India, one of the oldest Indian restaurants in South London’s Cheam village tells Curry Life about how life was back then, and the way things have changed in the years gone by. Though he’s partly retired, his restaurant is still a buzzing eatery run by his two sons, despite the challenges the restaurants are currently facing.

Mr Abdul Malik is a popular British-Bangladeshi businessman, known for his contribution to the catering industry in the UK and numerous businesses in Bangladesh. He is a kind hearted and generous gentleman, who is actively involved with Surrey Bangladesh Welfare Association as President, working for the local community and charity events. Back in Bangladesh, Mr Malik is the Chairman of Momtaz Diagnostic Hospital in Dhaka, Chairman of Progressive Life Insurance, Chairman of Malik and Sons Bakery, and Director of Sarina Gas Station.

In the UK, he got involved with the Bangladesh Caterers Association from as early as 1963, barely a year after he moved to this country. Since then he has been actively involved in the catering industry for nearly five decades. He held positions of senior vice president and treasurer of BCA for many years and has also been the President of BCA Surrey region for 12 years. In 2012, he was again elected as the chief treasurer of BCA. The Star of India has been the flagship venue for important business meetings throughout his tenure in BCA. Highlighting issues and addressing concerns faced by the catering industry was one of the primary areas he has kept his focus on. He also held the position of a Director for the UKBCCI, an organisation that aims to improve the trade ties between the UK and Bangladesh.

For a 16-year-old then, the most obvious choice was study and work. Abdul enrolled in a polytechnic course but the three years there helped him decide he didn’t enjoy being in the “motor mechanics” field. However, he made some good friends there. “My friend and colleague from the course joined Ford as a General Manager, and then went on to becoming the Chief engineer. Before he passed away, he used to come here to see me every month,” he reminisces.

The initial days were tough, but his grit and hard work paid off. “I got a job to do washing up and cleaning in Kensington High Street, at a steakhouse, where I even tried a hand at cooking and grilling. I remember my salary then was £3.50 per week,” he recollects about his two-year stint.

Moving on to a different industry, Malik started working with Miah & Sons, importers and restaurant suppliers of raw freshwater king prawns and shrimps. He worked with them for a few years but his yearning to be in the food and hospitality industry, took him back to the restaurant in Kingston. After gaining experience in different restaurants, Malik decided it was time for him to have his own.

“In 1968, I started a restaurant in partnership in Manchester. After 18 months, my partner wanted to sell out, so I took over the complete business. The restaurant was successful, but I got a better offer and chance in Cheam, Surrey, so I moved here in 1971 along with my family,” he adds.

Moving to Cheam, has been one of the best decisions of Mr Malik’s life. The Star of India restaurant, which serves up authentic Bangladeshi and Indian food, was established in 1971. Taking over an Indian restaurant, which previously housed Café Rendevous, a bar and café, the prime location worked in his favour.

“We stuck to the name — The Star – the same as our previous restaurant in Manchester. And we did shine out. There were not many challenges as I was familiar and confident about the industry. It was a lucrative business, which we were running smoothly as there was not much competition, hence busy on all days, noon and night,” he says.

An experienced chef himself and a good manager, Malik focussed on his restaurant as well as the Bangladesh Catering Association, which he was actively involved with. The restaurant served as a venue for many of their meetings and became the hub to discuss ideas and campaigns for the community.

Running the Star of India restaurant for 48 years under the same ownership is indeed commendable. However, things have not always been the same. The challenges these days are far more – right from deciding menus to employing staff.

“The menus were simple and easy – we didn’t have a booklet running into pages back then. Now it is difficult to even remember the variety and types of naan (bread) available, leave alone the kinds of curries,” he points out.

In addition, the struggles of competition between different restaurants and cuisines these days are plenty. “There are about 35 restaurants in the 3-mile radius. We are open only in the evenings as the industry is marred by staff problem. Property prices these days are sky high,” Mr Malik complains.

The business now lies in the able of his sons, who also run another restaurant named Blue Bengal in Carshalton. Jewel and Hellal were born in Manchester and brought up in Surrey and now live in Cheam with their families. After completing their education from Guildford College, it wasn’t easy to convince them into restaurant business, Mr Malik reveals.

“Initially they didn’t want to come to this industry. I really had to convince them to work for themselves and not for anyone and look at the positives,” he says, drawing from his own experience. “When I came to the UK, it was a difficult time and even more difficult to get a job,” he adds, recounting how he first went back to Bangladesh only after five years in 1967.

“I won’t say the future of restaurants is very great. Running the business has its own challenges but at least we have a good family life,” concludes the proud 74-year-old, who has five grandchildren.