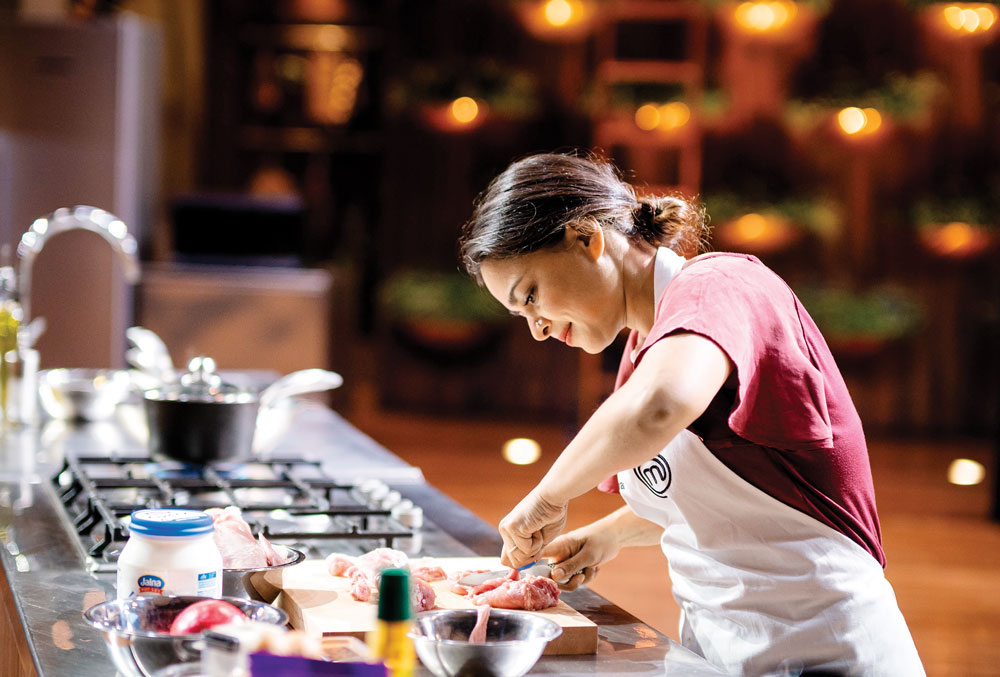 Panthabhat (fermented rice), aloo bhorta (spiced mash potato) and khashirrezala (goat meat curry) are just some of the traditional Bengali dishes that wowed television audiences this year. Prepared by MasterChef Australia contestant Kishwar Chowdhury, who placed third in the cooking competition, the dishes were both a celebration of her Bengali heritage and her love of the cuisine.

For those unfamiliar with the television series MasterChef Australia (which is different to the UK version), 24 competitors are selected following auditions. They then take part in various tasks over a number of weeks until three remain in the grand finale, undertaking three challenges over two nights. The winner is decided by the most points scored for their dishes and stands to win a grand prize of AUS $250,000, with the runner up winning AUS $30,000 and the third-placed contestant AUS $20,000. The latest series, which featured Chowdhury, aired over several months, from April to July.

Melbourne-based Chowdhury, who owns a printing business with her husband, has been cooking for as long as she can remember. One of her earliest memories is of baking with her mother, while she also recalls marking festivals and family occasions with meals around the table, with her father rustling up hearty dishes. Her desire to bring Bangladeshi culture and cooking under the spotlight stems from her heritage.

“My upbringing was very traditional, like many migrant families we really held on to our culture and food through arts and language,” recalls Chowdhury. “My mother was from India and my father from Bangladesh [where he was a freedom fighter], both were well-travelled, with my mother having visited Burma (now Myanmar), Pakistan and Afghanistan. “We had a lot of different foods on our table and for me, cooking was a creative passion.”

Chowdhury moved from Melbourne to London in 2007 to study at university and took the opportunity to travel around Europe, before heading to Bangladesh in 2010 to set up her printing business.

“When I was a young adult, travelling and living on my own, I pared down what I cooked and ate more simply,” she explains. “I found beauty and simplicity in cooking for myself and became more technical with my food and explored new flavours with my travels. My move to Bangladesh had a massive influence on my cooking. Living in Asia changed my food philosophy completely and made me aware of seasonality. If something was not in season, it was not available, and when it was, people would eat that fish or that vegetable. What seemed like a hindrance instead became a revelation and it was an important lesson.”

During her time away from Australia, Chowdhury cites chefs such as Anthony Bourdain and Yotam Ottolenghi as huge influences, and she emulated the latter’s cooking while in Bangladesh.

“Ottolenghi is all about those Middle Eastern ingredients, such as pulses and grains and I could easily find these ingredients in Bangladesh,” she says. “There were other interesting vegetables and it was an opportunity to learn about plant-based food. From a young age, I loved watching Anthony Bourdain, who went into uncharted territories, as well as Poh Ling Yeow [a former Masterchef Australia contestant]. She brought so much diversity to our screens and it was fantastic to see a role model like Poh embracing her heritage.”

Chowdhury returned to Melbourne in 2015 and continued with the family printing business while raising a young family. But she says she struggled to reconcile her upbringing with her heritage, and felt a desire to reconnect with Bengali culture, which led her to eventually apply for Masterchef Australia.

“My parents had worked hard to hold on to their identity and I struggled with being born and brought up in Australia and being Bengali as well,” she says. “I felt that I really needed to pass down everything they had taught me – my parents were very hands-on where food was concerned.”

Chowdhury believes representation played its part too, as she says there is not really much said about Bengalis, Bangladesh or east Indian practices, instead, it all tends to get wrapped up in Indian culture and forgotten about.

“When I was growing up, no one here knew where Bangladesh was until the cricket team started winning,” she says. “It is important for someone like me to be visible, so my children can also be seen and not be embarrassed. As my son was growing older, he was happy to take bao to school for example, but less keen to take Bengali food. It comes down to representation.”

Chowdhury’s son prompted her to enter MasterChef Australia, an experience she describes as ‘very spur of the moment’.

“I didn’t expect to get in but when I got there [to the auditions] and they asked me what my background was, I said if there was one thing I feel passionate about it’s that Bangladeshi food is not really ‘seen’ and deserves more,” she says.

Chowdhury describes the Masterchef experience as a ‘magical place’, one that is very competitive, where you are not just cooking under time pressure but trying to stand out amongst 23 amazing cooks in the same room.

“There are very long hours and you have to dig deep and open yourself up and be vulnerable,” says Chowdury. “You also have to always be in exam mode, you have to be ready to go, whether it’s sweet or savoury or pastry, you have to get dishes prepared and be ready to cook. It’s competitive, it’s tough and a lot of pressure but extremely exhilarating. Taking part has given me a new fire in my belly.”

The experience, adds Chowdhury, taught her where her strengths lie – she admits that like many other families, she cooks a lot of everything and anything.

“I always knew Bengali food was fantastic and I love it but it’s about being open and vulnerable – you are on international television, cooking something you know is great but you don’t really see it in a restaurant, it’s not something that is known and seen in public,” she says. “Most of the time, I was doing something for the very first time on an international platform; when the judges ate it and appreciated it, this gave me the confidence to keep doing it and to back myself and say: ‘this is my food dream, it starts now’.”

Once Masterchef Australia aired, Chowdury’s Bengali dishes had millions of hits on the web and her creations were shared online by many more people, which she says goes to show that there is a place for the cuisine. The dishes she created were a combination of what her parents taught her and different cooking techniques learnt from her own experience, which helped to elevate dishes or add a twist.

“Having to cook dishes in 75 minutes was a challenge, it’s about trying to stay authentic while adopting many new techniques,” she says. “If there was something we would marinade in the tandoor, I would smoke it first with a wood apple chip finish on a hibachi or in the oven, so the flavours are punchy.”

Since Masterchef Australia finished in July, Chowdhury has not looked back. As soon as the show finished, she started training with Michelin-star chef Masahiko Yomoda at Ishizuka, which offers fine dining with French/Japanese Kaiseki degustation menus. Chowdhury described her time there as a ‘fantastic experience’. This has since led to a collaboration with Adam D’Sylva’s modern Indian restaurant Tonka, based in Melbourne, where she released a selection of her own dishes. These included ‘Kishwar’s Charred Corn Chaat’ and ‘Kishwar’s Veal Osso Bucco Rezala’. With the restaurant booked out for much of August with diners keen to taste the menu, Chowdhury says it was ‘desperately disappointing’ when Melbourne went into lockdown, forcing the restaurant to close.

“We had one service on the night of my launch, then Melbourne went into lockdown,” she recalls. “It was very traumatic, we had worked for weeks to perfect the menu and there was a huge response, with the whole event booked out every single night in August.”

Chowdhury adapted quickly to the fast-changing situation, with the food available instead for home delivery and stocked in supermarkets.

It comes as no surprise then that at present, Chowdhury has no plans to return to the family printing business. She wants to use the momentum from the show and her experience gained to start a conversation about the importance of sharing identity and food. In the near future, Chowdhury is looking to produce a cookbook that reflects her roots and her experiences to date, and which honours the cuisine of her ancestors. It’s an idea she referred to often on the television show; having learnt her craft from her mother and her grandmother, she is equally keen to pass this knowledge on to her two children.

“I want to incorporate my food influences, places I have travelled to and been inspired by and my Bengali heritage, so I can take readers to those corners of the world,” she says.