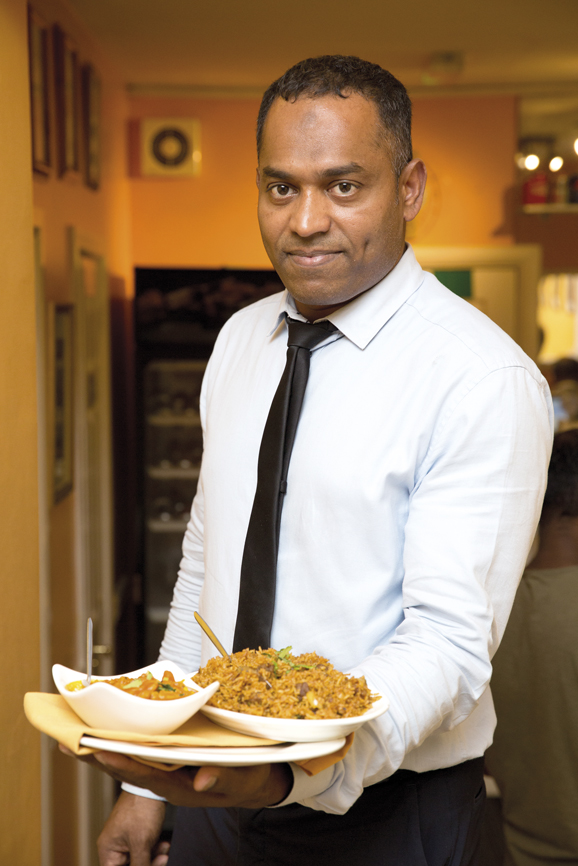 Taste of Nawab definitely worth a visit

It goes without saying that there  are a lot of factors that go into making a successful restaurant. A great chef, a diverse menu, good service and savvy marketing. But when someone tastes your food and finds themselves filling up not only with an amazing meal but with an inexplicable sense of happiness – that’s when you know you’ve really succeeded.

A quick internet search of North-London based restaurant, Taste of Nawab, tells you that it markets itself as an Indian-Bengali restaurant that serves authentic, exquisite cuisine fit for royalty. But there’s something about the relatively small business nestled between rows of shops on Colney Hatch Lane, in Muswell Hill, that makes it special.

There is a sense of warmth, a cloud of familiarity ,that greets anyone who walks through the doors of the restaurant managed by Abdul Rahman (Mujib). He waits at the door and greets me as I approach him- and he does this with every single person who follows me- and that’s the first indication that the restaurant is so much more than just a business to Abdul.

Mild-mannered, engaging and the slightest bit silly, the 46-year-old manager has been in the business for as long as I have been alive- and his journey to where he now stands at Taste of Nawab is as inspiring as any tales of a Prince and his brave conquering.

He starts with a story from his childhood, as he recalls his first job doing paper rounds as a young boy in Islington, Angel. From that 11-year-old paper boy, he went on to work various jobs – at a sweet shop, a mini-market and even a McDonalds – from where he picked up different sets of skills,  he finally found his calling. He says, “ After working for six months at Mcdonalds, I moved to a three-star hotel for another six months. Then I moved into an Indian restaurant called Wimbledon Tandoori, in Wimbledon Village where I worked for six years from 1990 to 1996 – and that’s where I learned my trade.”

Endlessly professional– as he shortly excuses himself later in the evening to check in with every single customer – Abdul explains that he has always been clear about what he wanted from his life and that he has been fortunate enough to surround himself with the right people who saw the spark in him.

Abdul strongly believes what you give to someone is what you’ll get back, and this aspect of his work ethic explains why he was promoted to manager within his first month of working at Wimbledon Tandoori. Treating the restaurant like his own, he mentions that customers often enquired if it was his own endeavour, encouraging him to take a step into the restaurant world himself.

So after six years in Wimbledon, receiving praise from everyone who witnessed his impeccable quality of service and his respectful interaction with customers, he moved on to the next chapter of his life – a business to call his own. Explaining how it all began, he says, “ I came to Muswell Hill on September 5th, 1996 and I instantly knew it was for me, but I knew it wouldn’t be easy.”

And easy – it was not.  Having to start from scratch, taking over as manager of a restaurant struggling to keep afloat, Abdul had his work cut out for him. He explains,” Before I took over, they wouldn’t get a single customer all night and business was quite bad. When I came in people were sceptical- that I was just one of the people passing through as another manager- but I told people that I could make things better for them with their own support – I wanted feedback from customers on what they wanted from me and where I could improve.”

Soon enough business began picking up, and Abdul credits this to his own skills, to the God looking over him and to the customers themselves. He repeats over and over, throughout our nearly 2-hour conversation, that his customers, and their comfort is his – and his team’s – priority. Gushing about his customers, he says, “In restaurants usually people are trying to rush customers or oversell their products, but what we want is for them to feel comfortable and relaxed. We want the atmosphere to be like their own home, because we look after them like they are our own family.”

As humble as he is and as much as he makes it a point to credit his incredible team at the restaurant, Abdul also knows that he worked hard to get where he is, and he is proud of it. Delving into the canvasing he did to increase the popularity of the restaurant in the early days, he says, “ I did a lot of my charity work to get the local community involved. The first fundraiser was a full house.

“Soon enough I began taking my community work to schools, shops, pubs – where I’d give out leaflets and samples of onion baji, mint sauce and our restaurant’s speciality Nawab sauce. To everyone who loved the food, I’d hand out a takeout menu and ask them to drop in. By the year 2000, people from all over were visiting!  ”

With the popularity of the restaurant in mind and the topic of sauces and samples on the table , we talk about the dishes on offer at the restaurant. Abdul explains that while the menu – creative yet clear, simple yet classy- doesn’t offer many dishes there is a range of choices available – whether vegan, vegetarian or non-veg.

Marked clearly with allergen information, the typography on the menu is more than enough to get any food lover salivating. He mentions that while most dishes sell well, karahi was the most popular dish – so the opportunity to order it couldn’t be missed.

As we explore the plethora options, Abdul deftly picks and recommends what he thinks he is best suited to my meat-loving tastes, while also catering to my mum’s vegetarian restrictions. And as the dishes comes out one after another – quick, hot and flavourful – it’s instantly clear that none of Abdul’s claims were overselling the brilliant decadence of the food on offer.

First comes a crispy entree of fried prawns and a cluster of tangy king prawns laid on a sizzling batura. Dancing across your taste buds, the food is filling yet light. And the biryani, naan,  chicken karahi, lamb aubergine and chickpea  curries that follow, tease you with tinges of spice and sourness, while never overpowering your senses.

Portions large yet manageable, and the food as fresh as they could – it’s the kind of food I left behind when I moved from India three years ago – and the kind of food anyone who loves authentic Indian cooking would love. The biryani and the chickpea curry were definitely highlights amalgamating everything I miss about my hometown with powerful flavours I never knew existed.

Tasting the previously mentioned Nawab sauce was also an unforgettable experience as the unique recipe balances spots of sweetness with tangy touches and spicy flares in perfect harmony – making it the perfect accompaniment to every dish that would need an accompaniment, but admittedly licking it up by the handful is just as satisfying.

Speaking of satisfaction, we discuss what made Abdul choose this career as his path to contentment. He reveals that instead of an efficient restaurant manager he could have ended up a postman- he didn’t pass the exam by just one point – or even a hairdresser. Throwing out another unexpected fact about being a semi-professional barber, he says “ When I was in school in Year 3 or 4 I was asked what I wanted to be when I grew up – I said a waiter, a manager and then have my own business. But while I was in Wimbledon there was a time when  I wanted to be a hairdresser and I went into a salon to ask if they had an unpaid vacancy so that I learn but they told me people wouldn’t like me at all because of my skin colour-  and that’s when I decided I would be successful in my own right.”

He says, “ I worked hard to get to a point where no one can criticise me, or act like they are above me. But I’m not a magician, it’s the team who support me and the customers who have made us everything we are.”

Incredibly loved and respected by those around him, Abdul who recognises every customer by their face and name has become synonymous with the Taste of Nawab- a fact made clear by the sweet story he proceeds to narrate. He says, “ When I used to go to schools, I would do fundraising for them, donating part of my profits to them. And it was the children who used to say to their parents ‘we want to go to Abdul’s restaurant.’

“Yesterday there was a young girl who’s only nine years old and when her parents asked where she’d like to celebrate her birthday she said there’s only one place – Abdul’s restaurant. It’s these kinds of things that make the whole journey memorable.”

Abdul doesn’t want much more – he is content. But he does hope to expand his restaurant, and explains, “ I want to expand but only here not anywhere else. I’ve seen it many times before, people open three or four restaurants and then one of them collapses. Why? Because one person cannot run four shows.”

He is humble – hoping to run what he already has to the best of his abilities, to learn and grow just as he has been for the past 23 years, and more than anything else to leave behind a legacy that remembers him as someone who did his job well.

Open seven days a week, with a seating capacity of 34, and a BYO alcohol policy, Taste of Nawab is definitely worth a visit if you want great food – but it’s a must-visit landmark in London if you’re looking a second home, where the familiar face  and warm handshake of Abdul will greet you– treating you like the special person that you are-  every single time you walk through the doors of the royal utopia in Muswell Hill.